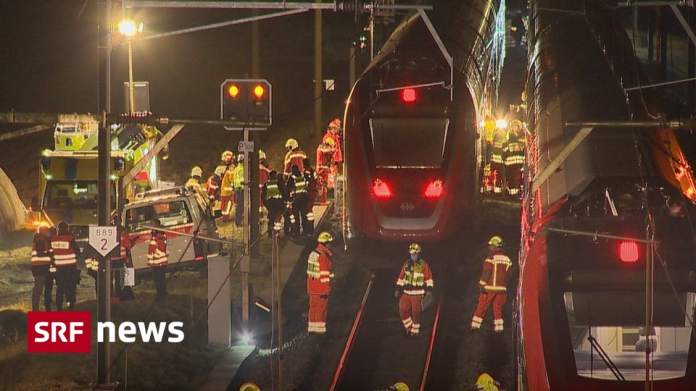 In long-distance traffic, the trains between Zurich and Wil are canceled. Because the space in the replacement buses is limited, SBB advises against traveling between Winterthur and Wil during rush hour.

For reasons that have not yet been clarified, a car driver got onto the railroad tracks at a point without a level crossing on Monday evening. This was confirmed by Ralph Hirt, the spokesman for the Zurich canton police.

The  vehicle got between two trains that were traveling in opposite directions.

The re was only around 80 centimeters of space between the two trains.

The  car was completely destroyed, the fire brigade had to rescue the woman from the car.

An Interregio from St. Gallen and an Intercity from Zurich were affected by the collision. Upon impact, the first car or the axle jumped out of the tracks.

The  collision caused considerable damage to the trains and the road.

That night, the SBB started to put the trains back on track and repair the track. Due to the necessary work, the route remains closed. How long the interruption will last cannot be said yet, said an SBB spokeswoman.

According to Hirt, forensic evidence is at work.

The  police were in the night to clear the scene of the accident.

The  east-west axis between Zurich and St. Gallen is one of the most heavily traveled connections in Swiss rail traffic.

Michael Wendler: “DSDS” star makes a song about Wendler – the...