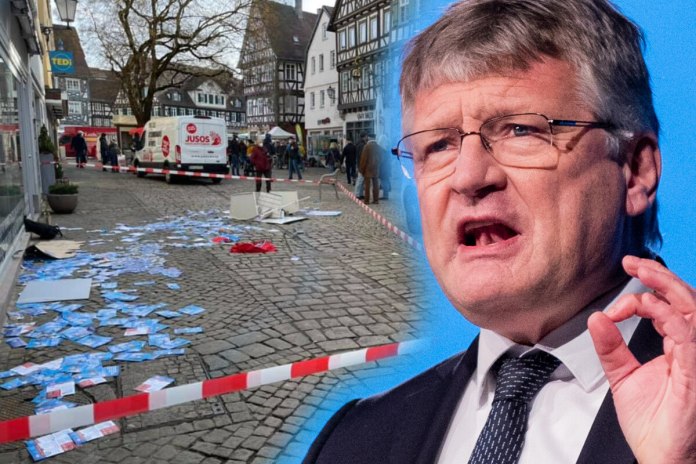 On Saturday, an AfD politician was beaten up by the Antifa in Schorndorf near Stuttgart. Front man Jörg Meuthen spoke up later.

The  state election is due to take place in Baden-Württemberg on March 14th, so the AfD set up an information stand on the market square in Schorndorf near Stuttgart on Saturday.

“Around 10 o’clock a group of around 15-20 people came from the direction of Kirchgasse to the AfD stand and is said to have attacked the AfD stand and the party members there,” write the public prosecutor and the police about the attack.

The  group was “due to the flags and banners that were carried with them to be assigned to the Antifa scene”.

Landtag candidate Schwarz was knocked to the ground and beaten by the attackers.

“When the injured party, lying on the floor, tried to dial the emergency call with his smartphone, it was said to have been torn from his hands and stolen by a hitherto unknown person,” it continues.

The  information stand was completely destroyed in the attack.

Schwarz came to the hospital by ambulance.

The  attackers fled. Five suspects (18 to 25) were later arrested.

AfD Rems-Murr wrote after the attack on Facebook that, in addition to Schwarz, Jürgen Braun (59), a member of the Bundestag, and an almost 80-year-old helper “were maltreated with poles and thrown to the ground”. Both were probably unharmed.

Party frontman Jörg Meuthen took the incident as an occasion for an angry speech on his Facebook page.

“This is exactly what happens when left-wing extremism is repeatedly belittled or even expressed solidarity with it, as SPD chairwoman Saskia Esken tweeted not long ago,” he writes.

In the eyes of the 59-year-old, journalists were also complicit: “

The y cloud over the citizens how big the problem has become in the meantime.

The  terrorists and anti-democrats are among us. Many of them call themselves ‘anti-fascists’ and ‘activists’, and there are plenty of people who naively believe them because of media obfuscation.”

The  Office for the Protection of the Constitution is also getting a broadside: “If he finally did his legally imposed duty here, a considerable part of the SPD, the Greens and the Left would have long been under observation.”

By the way: After the attack on the election booth, an alleged letter of confession was posted on the Indymedia portal used by left-wing radicals.

For the anonymous authors, the AfD is “a danger for everyone who does not fit into their racist worldview or who live in precarious circumstances”.

The  “visit” to the stand in Schorndorf is justified as follows: “One year after the attack in Hanau it was made clear to those who are most aggressively agitating against everything ‘un-German’ and thus provide the ideological ammunition for right-wing terrorists that being racist still means problems. “

“People are longing”: Munich film producer calls for the cinema to...

Leopold Museum starts in February with “Twilight of Man” – Culture...

“You can’t hide the topic at all”

Philipp does not regret the change of BVB Senate – Berlin – In Berlin fewer customers are allowed to...

Lenz can imagine the future at Union Berlin

This is how you see the game between FC Bayern and...