A letter bomber has been targeting food companies in southern Germany for days. Now the police have arrested a suspect and ransacked his home.

After three attacks with explosive mail on food companies in Baden-Württemberg and Bavaria, the police arrested a 66-year-old suspect. An arrest warrant was issued against him and he was taken to a correctional facility.  The  public prosecutor’s office in Heidelberg and the State Criminal Police Office of Baden-Württemberg shared this on Saturday.

According to the police, the man is a pensioner and comes from the Ulm area. So far he is not known for other offenses. He was arrested on Friday evening without resistance and has not yet commented on the allegations.

The  authorities suspect him of having sent mail filled with explosives to several companies in the food industry in Bavaria and Baden-Württemberg in the past few days.

The  man’s home was ransacked by police.

The  evidence found was still being investigated, it said.

The  authorities had already announced on Friday that an initial reference to the sender of the letter bombs led to Ulm.

In the past few days there have been attacks with letter bombs on a Lidl headquarters in Neckarsulm, the “Capri Sonne” producer ADM Wild in Eppelheim and an attempted attack on the baby food producer Hipp in Pfaffenhofen in Upper Bavaria. A total of four people were injured.

The  police have been on constant alert since then: a special commission was set up in Baden-Württemberg, and the State Criminal Police Office has taken over the investigation. A total of more than 100 officers hunted for the bomb maker. Solved on Saturday lunchtime a suspicious package in a DHL headquarters in Leimen a large-scale operation – as the police later announced, it was a false alarm.

The  investigators apparently assume that the series has now come to an end with the arrest: It is unlikely that the accused had sent further mail, it said on Saturday.

Government money in lockdown: How the federal government is helping retailers

Several missions in Aargau: family loses all their belongings in a... 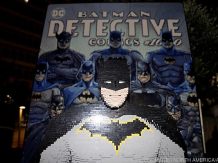 Record bid for a Batman comic at auction in the US...

Corona: Where vaccinated and recovered people are allowed to enter without... What the engine failure on Flight 328 means for Boeing