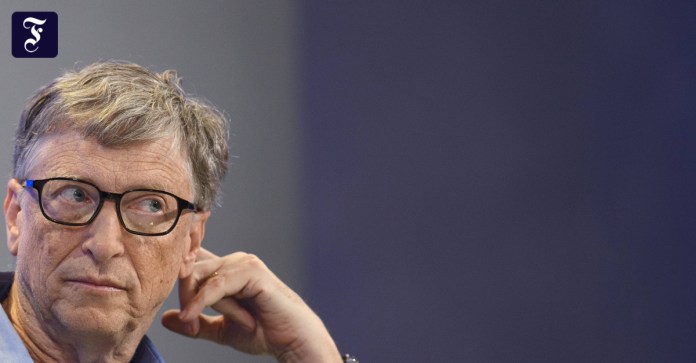 Nafter the very good performance of the Apple share for years, a second well-known investor has now pressed the sell button.  The  Bill and Melinda Gates Foundation sold one million shares of the iPhone group in the final quarter of 2020, according to reports that have now been published to the US Securities and Exchange Commission.

The  foundation, which manages part of the Microsoft founder’s assets, has reduced its investment in Apple by half.

In the case of other technology groups, the foundation even withdrew completely. She sold all of her shares in the transportation service provider Uber and in the Chinese Internet giant Alibaba, whose founder and CEO Jack Ma surprisingly disappeared from the scene for a few weeks last fall. However, the foundation held smaller shares in both companies. According to previous SEC reports, it was most recently 550,000 Alibaba shares and 26,000 Uber shares.

The  foundation has also reduced its involvement in Amazon and the Google parent company Alphabet.

Is the end of the tech boom in sight?

In the markets, many are now wondering whether and how long the big technology corporations can continue to soar. Doubters see steps like those of Bill Gates and, shortly before, the fund company of investor legend Warren Buffett, Berkshire Hathaway, confirmed. Only a few days ago it became known that Berkshire had reduced its stake in Apple by 6 percent.

With a value of around 120 billion dollars, the iPhone group remains Buffett’s largest single investment. But the acquisitions that the company announced at the same time speak for a certain shift.

Buffett got on a large scale with the American telephone company Verizon and the oil company Chevron. Berkshire Hathaway now owns $ 8.6 billion in Verizon and $ 4.1 billion in Chevron. Buffett had already joined Deutsche Telekom’s American subsidiary, T-Mobile US, in late summer. He increased the investment again in the final quarter to now $ 639 million. As two new priorities, Buffett is therefore focusing on a possible boom on the oil market after the corona crisis has subsided and on the opportunities offered by the new 5G Internet standard.

Both Berkshire Hathaway and the Bill and Melinda Gates Foundation are also relying on other medical innovations.

The  Buffett company has sold its stake in Biontech partner Pfizer worth $ 136 million. Participations in the pharmaceutical groups Abbvie, Merck & Co and Bristol Myers Squibb were expanded.

The  foundation of the Microsoft founder strongly increased one investment in particular: the commitment to Schrödinger increased it by 2 million to 6.9 million shares.

Corona quick test at Aldi: This is how the self-test works

Biathlon: Schwaiger scratches the top ten in the sprint

In uniform: the supposed postman becomes a drug courier

Berlin & Brandenburg: More than one in five works on at...