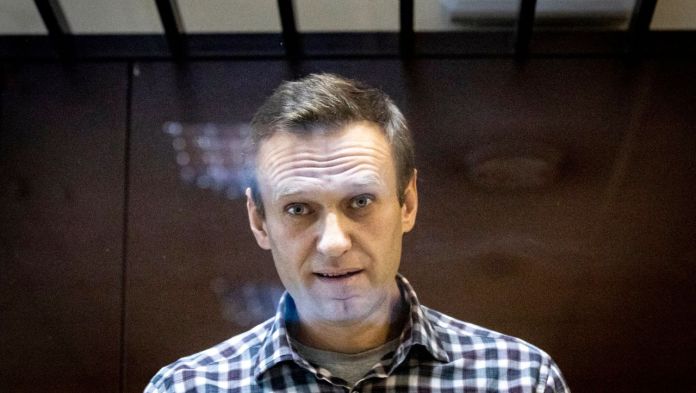 Alexej Navalny showed an unfamiliar side this Saturday.  The  Russian opposition politician is actually known for his dry sense of humor, his disrespect for authorities. In the Moscow courtroom where Navalny appeared, hardly anyone had expected that the same Navalny would invoke God, quote the Sermon on the Mount and demonstrate his faith.
It was decided there in the second instance whether the Kremlin opponent would have to serve a prison sentence of three and a half years, which had already been imposed in 2014, or not. A district court ruled in the first instance that Navalny had violated probation conditions in 2020.

The  politician was poisoned last August – allegedly by the domestic secret service FSB – and was then treated in Germany. He returned to Russia voluntarily in January and was arrested.

He will “talk about God and salvation. I’m going to turn up the pathos control to the maximum, so to speak, ”Navalny warned the judge. He was a believing person, even if that was not always the case and some of his colleagues scoffed at it. But the belief “helps me in my job because everything becomes much, much easier,” he said.
“Blessed are those who hunger and thirst for justice, for they should be satisfied,” quoted Navalny from the Sermon on the Mount. That might sound exotic and strange, but the conviction that in the end the truth will prevail and the thirst for justice will be quenched is basically Russia’s most important political idea. Navalny also quoted the Russian cult crime film »Brat 2«: »

The  strength lies in the truth« is the hero’s favorite saying, as well as »Harry Potter« and the cartoon series »Rick and Morty«. In short: he tried to turn the pathos regulator down again with citations from pop culture.

But Navalny used the political stage that this process offered him in new and probably better ways than in previous negotiations. For many Russians, Navalny’s demeanor is too poisonous and aggressive. Others see him as the enemy of conservative Christian values ​​that Russian television portrays him as. Both groups showed an unexpected, new Navalny on Saturday.

Around 50 mostly Russian journalists were represented in the courtroom, plus a few foreign diplomats, but not Navalny’s wife Julija.

The  prisoner could at least see an interview and photographs of her in the fashion magazine Harper’s Bazaar, which his lawyer showed him.

The  hearing, including the verdict, only lasted two hours.

The  prosecutor repeated known allegations in new words. Navalny did not report properly to the penal authorities after his stay at the Charité hospital in Berlin, she said. Instead, he gave interviews, went for walks and shared photos from the Black Forest on Instagram. ‘Is that what a sick person has to pass the time? Where should the judicial inspectors officially report him? In the forest, by the waterfall, by the lake? ”She asked pointedly.

With the decision of the Moscow City Court, Navalny has to begin his prison sentence in a penal colony with immediate effect. So far he has been housed in the Moscow remand prison “Sailor Silence”. Of the three and a half years of the 2014 sentence, he only has to serve two years, six months and two weeks. This was decided by the court after the deadlines that the politician had already spent under house arrest were taken into account again. Navalny accepted the verdict unmoved. He called out cheerfully to the correspondent: “Greetings to SPIEGEL!”

Bizarrely, the trial was followed immediately by another – again with a last word from the accused. To save time, both proceedings had been moved to the same courtroom in the Babushkinsky District Court on the outskirts of Moscow.

Whereas in the morning it was Nawalny’s alleged violation of probation obligations, in the afternoon it was his alleged one Defamation of a World War II Veteran. In June 2000, Navalny had published a nasty tweet against a commercial on the Kremlin broadcaster Russia Today. In it, Putin supporters – including a medal-hung veteran – had campaigned for a constitutional reform that would allow Vladimir Putin further terms in office. Navalny called the advocates blanket “droolers” and “traitors”.

Although he faces no prison sentence for the defamation, the second criminal case has an impact on Nawalny’s reputation. Any criticism of veterans is currently considered an unpatriotic break of taboos in Russia. Instead of providing veterans with good pensions, their admiration is only faked to distract them from other issues, Navalny said: “Our state power, from Putin to the United Russia party to you here, has turned into a huge pig, the eats from a trough full of oil dollars, and when someone knocks on its head and says: ‘Hello, this is for everyone!’, it lifts its head and says: ‘What? We do not allow veterans to be insulted! ‹«

On Saturday evening, the verdict was passed in the libel proceedings: In addition to his prison sentence, Navalny has to pay a fine of 850,000 rubles (a little more than 10,000 euros). Navalny could have avoided the conviction with a public apology to the veteran concerned Ignat Artemenko, the prosecutor reprimanded him after the verdict was pronounced. He didn’t do that.

The n she went out to damage her reputation herself: Navalny’s biography and the actions of his followers testified that he was »discrediting our country’s victory in the Great Patriotic War on principle«. It was the catchy quote that Kremlin television needed for the evening news.

Germany will shrink by 2040

Szoboszlai: Leipzig move “the best decision for my career”

Has Tessy of Luxembourg got engaged?

Guterres calls for a “climate emergency” to be declared worldwide

Michelle Trachtenberg: Joss Whedon wasn’t allowed to be alone with her

Vodafone malfunction: SIM cards were thrown from the network