The  Styrian sensor specialist ams now wants to push ahead with the integration of the German lighting company Osram into ams AG.

The  Styrian chip and sensor manufacturer announced on Tuesday that the domination and profit transfer agreement with Osram Licht AG could be entered and become effective. Several Osram shareholders had sued, which is why no entry in the commercial register has been possible so far.

The  Osram Annual General Meeting approved the domination agreement at the beginning of November.

The reafter, Osram shareholders have the choice between a guaranteed dividend or a settlement. With the contract, ams wants to gain access to Osram’s financial resources, also to repay the debts for the more than four billion euro takeover.

The  planning process for the integration is now well advanced, said the outgoing Osram boss Olaf Berlien at the general meeting on Tuesday. This is how the management levels are named and the control model is approved. Almost the entire management level at Osram has found a comparable position in the joint company. However, Berlien leaves the company at the end of the month. His successor will be the ams CFO Ingo Bank, who will take on the top Osram job in addition to his duties at ams.

In response to the corona crisis, Osram had massively put the brakes on costs.

The  investments have not been spared, said finance director Kathrin Dahnke: In the past financial year, they remained well below the level of the previous year at almost 100 million euros. “This low level of investment will remain an exception,” she said.

The  decline was mainly due to the exceptional year 2020.

Osram is now recovering from the pandemic faster than expected. Berlien reiterated the forecast that sales should increase by 10 to 14 percent and an adjusted operating return on sales of 12 to 15 percent is expected. In the first quarter (October to December), sales of around 840 million euros were on a par with the previous year, while the adjusted Ebitda of 162 million euros was 42 percent higher than a year earlier.

The  financial year at Osram runs until the end of September. In connection with the takeover by ams, the fiscal year is to be changed so that it coincides with the calendar year from next year.

“Lewis, please save my father!”

E-economy: wages and salaries rise by at least 1.5 percent 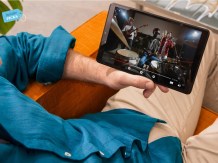 How does the drug help against Covid-19?