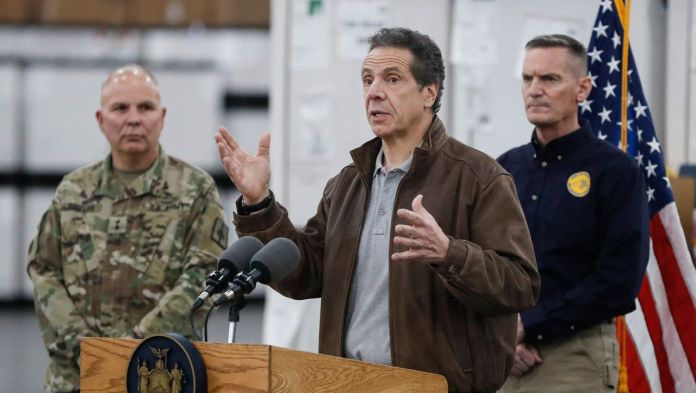 Anyone who criticizes Andrew Cuomo must dress warmly. New York’s governor aggressively fires at anyone who doubts, corrects, or simply questions him – especially since he became America’s corona hero.
Even party friends are not immune to the Democrat’s infamous outbursts of anger. Member of the State, Ron Kim, is also feeling this, who sharply attacked Cuomo because of his corona policy:  The  governor yelled at him on the phone and threatened to “destroy” his career, Kim reported. “It was a very traumatic experience.”

Cuomo denied this, but immediately followed suit: Kim, a native of South Korea, was a crook who led an old vendetta against him. Cuomo “can slander me as much as he wants,” Kim replied coldly – that doesn’t change his “deadly incompetent management.”

The  internal party quarrel does indeed have a fatal background. A year after New York became the global hot spot of the pandemic and Cuomo the telegenic savior, its star is extinguished. A scandal about the deaths in old people’s homes is now fueling a revolt from within its own ranks, plus confused corona rules, massive vaccination problems and his crude management style. Republicans and Democrats alike want to chase him off, the FBI is investigating – and Cuomo’s stubbornness only makes things worse.

Herbert Diess under pressure: VW boss before the vote of confidence?

“Would it be better not to vaccinate people who have already...

The mud and the city

Cyberpunk 2077 would look that bad on PS1

Australian Open: Roger Federer – quarantine as the main reason for...