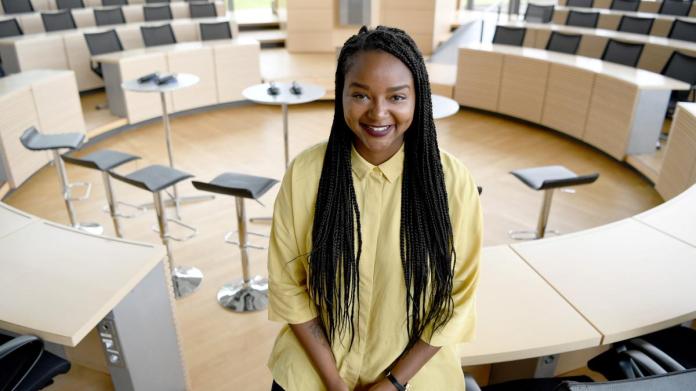 For diversity and against discrimination – Greens want “Ministry of Cohesion”

On the occasion of Hanau’s anniversary, the Greens want to anchor protection against “group-related violation” and the “elimination of existing disadvantages” in the Basic Law. Claudia Roth and Aminata Touré, for example, signed the request.

GOn the occasion of the anniversary of the Hanau attack, Rünen members from the federal government, the federal states and the EU Parliament presented a concept paper for a diverse society and the reduction of discrimination. It is about “the actual equality of all”, says the text that the AFP news agency received on Thursday in Berlin. A key demand is the ban on “all forms of group-related enmity” in the Basic Law.

Another requirement in the paper, which the “Zeit Online” portal first reported, is the establishment of a “Federal Ministry for Social Cohesion”. At its core, this should encompass the specialist area of ​​the previous family department, but should be upgraded through additional competencies, for example in the areas of migration and flight as well as promoting democracy.

Regarding the amendment to the Basic Law, the text states that Article 3, Paragraph 3 of the Constitution should be supplemented by the following sentence: “

The  state guarantees protection against any group-related violation of the equal dignity of all people and works towards the elimination of existing disadvantages.” All people who who live in Germany should also be given the right to vote regardless of their nationality.

Anti-racism as part of life

The  Greens want to develop the Federal Anti-Discrimination Agency (ADS) into a “central actor” who, in addition to its function as an ombudsman and counseling center, will in future also accompany, advise and monitor anti-discrimination measures ”.

A federal anti-discrimination law is intended to create a uniform legal framework in order to effectively reduce discrimination. Those affected by legal action want to strengthen the Greens, among other things by partially reversing the burden of proof.

The  paper has been signed by, among others, Bundestag Vice-President Claudia Roth, Bundestag member Ulle Schauws, Vice-President of the Schleswig-Holstein Landtag, Aminata Touré, the Greens’s spokesperson for women’s politics, Gesine Agena, and Berlin’s Green’s top candidate Bettina Jarasch. Agena told “Zeit Online” that the realization of equality in society was “a central task for the next federal government”.

The  Greens want to promote civil society work to strengthen democracy and protection against discrimination. “To this end, a law promoting democracy is absolutely necessary, with which important civil society work is structurally and permanently financially secured,” says the text.

For all new laws there should be a “diversity impact assessment”. Analogous to the ethics council, a “council for equality and cohesion in a society of many” is to be formed.

Quotes about the Eintracht victory in Mainz: “We were extra motivated”...

Coronavirus: Easing for the holidays is again in question Italy: Draghi took the last hurdle on the way to the...