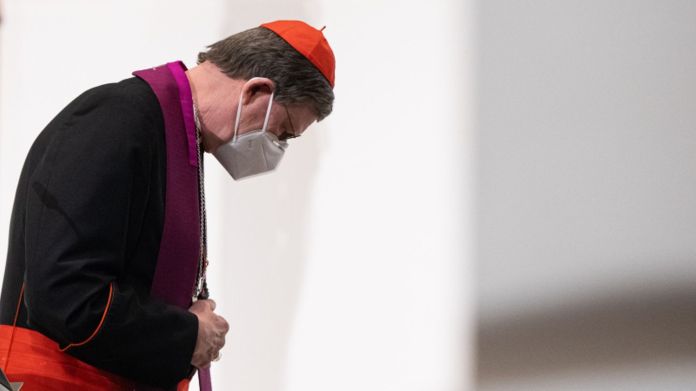 See in the video: Priest Christof May criticizes the Catholic Church.In his sermon on October 4, 2020, Priest Christof May criticized his church’s attitude towards divorced remarried people, homosexuality and the role of women.
May goes on to say that the Catholic Church should not see itself as a bouncer – also with regard to the role of women in the church.
May also discusses the situation of remarried couples in his sermon.
The  parish of St. Blaise shares the sermon on Facebook.

The  video is shared over 1200 times. Probably also because May finds such clear words in his sermon.

According to a report, the number of abuse victims in the Archdiocese of Cologne should be significantly higher than previously known. While Cardinal Woelki himself admits mistakes in the process of coming to terms with it, Catholic women’s rights activists nailed protest theses to several churches.

The  district court in Cologne can hardly save itself from inquiries. Many want to quit the Catholic Church since a report revealed that the number of perpetrators and victims in the abuse scandal surrounding the Archdiocese of Cologne is more than twice as high as previously assumed. As a result, shortly after the activation of additional appointments on Friday, a server even collapsed.

The re was a “very high, simultaneous access rate”, as a court spokesman announced. Because of the persistently high demand for appointments for leaving the church, the district court wants to significantly increase its offer.

After the high number of victims became known, the Archbishop of Cologne, Cardinal Rainer Maria Woelki, admitted errors in the reappraisal – and apologized. “I’m sure I also blamed myself here,” said Woelki in a video distributed over the weekend. “I’m so sorry for all of this.”

Around 230 accused and more than 270 victims

Four weeks before the submission of a legal opinion on the abuse scandal in the Archdiocese of Cologne, the first figures on perpetrators and victims have now become known, which are more than twice the previous information from the Archdiocese. As the “Kölner Stadt-Anzeiger” reported on Saturday, the study by the Munich law firm Westpfahl Spilker Wastl, which was put under lock and key, came to similar results as the substitute report by the Cologne criminal lawyer Björn Gercke.

According to the newspaper, the Munich report names around 230 suspects and more than 270 victims. Gercke confirmed to the “Kölner Stadt-Anzeiger” for the replacement report he had prepared on behalf of the Archdiocese of the figures of around 200 accused clergy and around 300 victims, which had already been mentioned by “Spiegel”. “It should be the final numbers,” said Gercke of the newspaper. However, the mere numbers are only partially meaningful without explanations.

In his word from the Lenten Shepherd, Cardinal Woelki spoke of “deep cracks” that ran through the archbishopric.

The se should not simply be “skipped” or “puttied up”. “All of this moves and depresses me very much,” continued Woelki. He promised a transparent and consistent clarification of the abuse offenses in the Archdiocese of Cologne.

The  cardinal himself is also under suspicion of covering up allegations of abuse against a priest who has since died. Woelki rejected this allegation.

The ses protests by women’s rights activists: “Struck a chord”

In protest against the reluctance to report on abuse, the Catholic reform initiative “Maria 2.0” hung up thesis papers on church doors in several German cities on Sunday.

The  actions in the style of Martin Luther took place in Munich, Würzburg, Augsburg, Cologne, Mainz and Freiburg, among others. “In our church all people have access to all offices” is the first thesis.

The  feminist movement advocates equal rights for women and men in the church. She fights against sexual abuse, abuse of power, compulsory celibacy and for a more open sexual morality.

The  reformers see their work confirmed after reports of an observation by the Vatican. “That is an accolade,” said the co-founder of the movement, Lisa Kötter from Münster. “It shows that we hit a nerve.” In 1517 Martin Luther heralded the Reformation and the split in the Catholic and Protestant Church with his 95 theses.

“We cannot change the church overnight”

“Protest is certainly a legitimate means,” said Kopp. “But we cannot change the church overnight, we have to do it in a good and trusting dialogue.” This also includes the conversation with the Vatican.

The  Church in Germany will not go a separate way without Rome when it comes to questions of world-church relevance.

Corona in Germany: “The stubbornness is unbearable”

Lauterbach criticizes the loosening of lockdowns: “With this decision the 3rd wave starts” – politics

Do unused vaccine doses really end up in the trash?

Visiting the shop is possible with an appointment from March 8th

Drugstore dm is planning test centers in front of the branches

It’s not that much opening: Buckled? Are you kidding me? Are you serious when you say that! The Chancellor got what she...

Lay test and rapid test – how they work

After mobbing by visitors: New fines in the Bundestag

Traces of blood up to the street! Seriously injured after...

Pizza delivery to the stadium during the Hoffenheim game

Amadeus Awards will be postponed until autumn