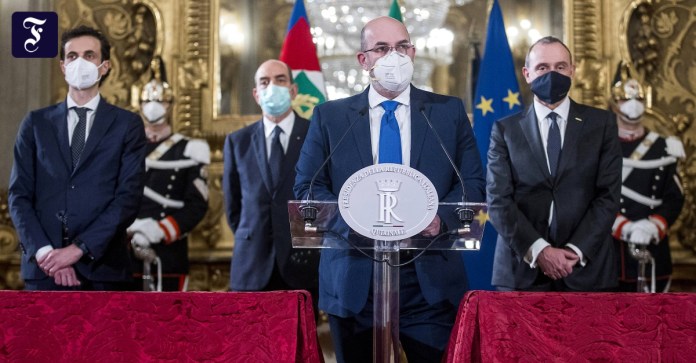 Dhe downward trend is clear. When the registered members and activists of the left-wing populist five-star movement, after winning the parliamentary election in March 2018, with almost 33 percent of the vote, voted for the first time on government participation in Rome, 94 percent said yes: to the coalition with the right-wing nationalist Lega. That was in June 2018. When they were asked in September 2019 whether the former protest movement should now enter into a government alliance with the Social Democrats, 79 percent agreed.

Political correspondent for Italy, the Vatican, Albania and Malta, based in Rome.

In the third survey of members about participation in government, this time in a de facto all-party coalition under Mario Draghi, only 59 percent followed the recommendation of founding father Beppe Grillo on Thursday. He and the political leadership had previously urged approval. Yet nearly 41 percent voted against participation in the Draghi government.

After the vote, party leader Vito Crimi said the “mission of our members is clear:

The  five-star movement will support the new government.” But according to media reports, 20 to 25 of the 202 elected representatives in the Chamber of Deputies and ten to ten in the smaller Chamber Fifteen of the government’s 107 senators from the five-star government withheld their votes.

The  majority for Draghi is not at risk. But the five stars are threatened with a split.

On the evening of the vote, Alessandro Di Battista, the leading representative of the movement’s left wing, announced his departure. That is a significant loss.

The  42-year-old activist from the very beginning sat for the movement from 2013 to 2018 in the Chamber of Deputies. Years ago, Grillo had chosen him as his successor as a leader. Di Battista embodies the ideological purity from the early days of the ecological-system-critical protest movement.

This shine has faded in the eyes of many former voters after eight years in parliament and after a good two and a half years of government responsibility for the five stars. In the latest polls, the movement only received 15 percent approval. In parting, Di Battista said that the five stars no longer stood for his convictions. And he no longer wants to stand up for theirs.

Hope for deal: euro and pound make up for losses –...