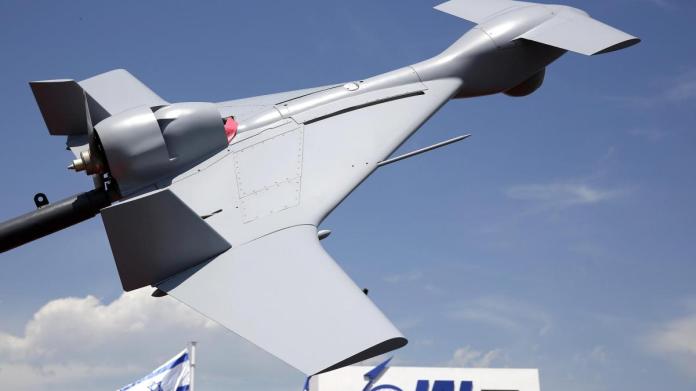 First circling in the sky for hours and then rushing towards the target: Loitering weapons, weapons hanging around, attack with artificial intelligence and can hardly be fended off.

The  new technology is a headache for some military.

Dhe Middle East weapons barometer is called Idex. This is the name of the arms fair that takes place every two years in Abu Dhabi, the capital of the United Arab Emirates.

The  Idex has just opened its doors, although trade fairs around the world are being canceled out of Corona caution. New drone models that are causing a revolution in warfare are met with great interest among visitors.

Experts speak of “loitering weapons” (literally: weapon hanging around) or kamikaze drones. Some variants can circling quietly in the sky for hours and then throw their explosives at tanks or other targets.

The  Idex also shows drones that take off vertically and that can select their targets with artificial intelligence and then drop explosives or fire guided weapons.

It is a new threat for the military because drones attack in swarms and it is then very difficult to defend them. In addition, tanks are usually not adequately protected against direct attacks from above. Furthermore, experts point to the possibility that it would have long been possible to let drones operate autonomously, i.e. without the consent of a human before being shot down.

For the armaments companies, a new, large business area arises from the manufacture of drones and their defense. Most drones are launched from the ground. However, there are already initial tests for take-offs from the air, from airplanes or even from small unmanned ships.

The  power of the flying threat became evident in the fall of 2020 in the war between Azerbaijan and Armenia over the crisis region Nagorno-Karabakh. Azerbaijani military used kamikaze drones to destroy a number of Armenian tanks, while other drones filmed the attacks for propaganda purposes. For industry experts, the trend towards the drone arsenal is irreversible.

One of the special features of the weapons is that not only established armaments companies from the USA, Russia or Israel have kamikaze drones in their arsenal. At the Idex trade fair, the large state armaments company Edge of the United Arab Emirates is presenting a complete family of new “Loitering Weapons”. It is known that, among others, Turkey also produces this type of weapon.

While the armament of drones has been discussed in Germany for around ten years and the SPD still sees a need for further discussion, dozens of nations around the world already have drones with weapons and not just for reconnaissance and observation. Many armed forces are currently procuring the new versions with the kamikaze function. This includes Poland through its company WB Electronics.

The  Israeli armaments company IAI, whose Harpy / Harop drone models were also allegedly used in the Nagorno-Karabakh conflict, has recently found a new customer in Asia.

IAI (Israel Aerospace Industries) is also on the Idex exhibitor list. According to industry reports, the Israeli delegation could not travel because air traffic to the Emirates has been suspended for corona protection reasons. Those responsible already relaxed the rules. While otherwise travelers to the Emirates are sent to a ten-day quarantine with GPS monitoring transmitter, this does not apply to the Idex visitors. It is sufficient to wear a mask, negative tests upon entry and free PCR tests in the hotels.

Nevertheless, this time fewer exhibitors and visitors come to Idex (February 21 to 25) and the simultaneous Navdex marine fair.

The  Middle East spends billions on armaments, which the providers actually do not want to miss. According to the Swedish peace research institute Sipri, for example, Saudi Arabia is number three in the world for armaments budgets (2018: 67 billion dollars), after the USA and China.

So it attracts large orders from the region – also for German arms companies. This time, the tank manufacturer Krauss-Maffei Wegmann (KMW), which even showed a Leopard tank at Idex in 2017, is missing.

According to observers, the fair shows that the states in the Middle East are building their own, large arms companies and are less and less dependent on arms imports.

A prime example is the relatively newly formed state Edge Group of the United Arab Emirates, with 12,000 employees, five billion dollars in sales and over 25 companies.

The  Edge-Group also indirectly includes the Thuringian weapons manufacturer CG Haenel, which is currently in a tug of war with Heckler & Koch and the new German assault rifle.

The  large state arms company of Saudi Arabia Sami (Saudi Arabia Military Industries), which is also pursuing the strategy of building up its own weapons know-how in order to become independent, is also represented at the Idex trade fair.

A Slovenian surprises everyone – Paris is on the up –...

Dollar down – Euro rises above important level ahead of ECB... Coronavirus in Berlin: B117 outbreak in the Vivantes Clinic Spandau –...