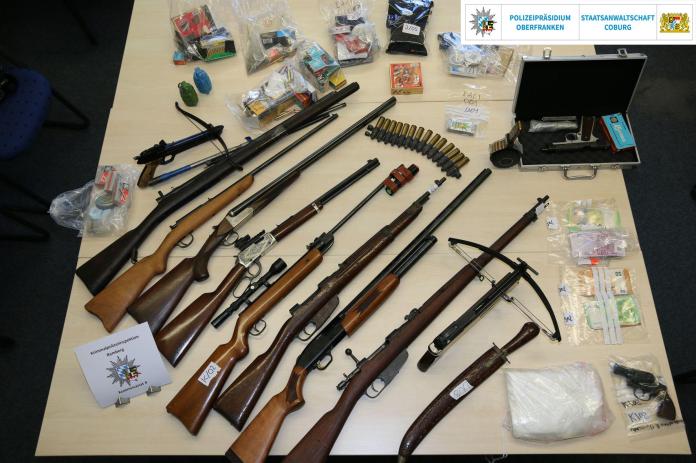 Police searched several apartments in the Bamberg district –
2 hours ago

In addition to a wide variety of firearms, cut and thrust weapons, the police also seized small amounts of narcotics.
22.02.2021

In the early morning hours of February 18, the police, the SEK and the USK and service dog handlers with police dogs posted themselves at several locations in the Bamberg region. A short time later they arrest two men, and a third is arrested a day later. In addition, the officers seized a large number of contraband goods – firearms, crossbows, ammunition, hand grenades.

It is not the first time that the investigators in the Bamberg district have struck. In December 2020, investigators targeted four men who are said to have illegally traded in weapons and narcotics.

The y were arrested, and the police found relevant evidence during searches. In the course of the investigation, the officers were able to locate other suspects, and in February the forces struck again.

The  prosecution statistics legally document how many people were convicted in Bavaria in 2019. We have put the numbers together graphically for you.

In addition to the contraband, the police seized cash in the five-digit range, money that the accused probably earned from the illegal arms trade. Arrest warrants were issued against the three men aged 38, 48 and 49; they are currently in different detention centers.

All current police reports can be found here.

Main suspect of the Reich citizen investigation in Ulm dead –...

Confusion about the alleged death of Bond girl Tanya Roberts

Crisis year due to Corona: German economy collapses by 5 percent