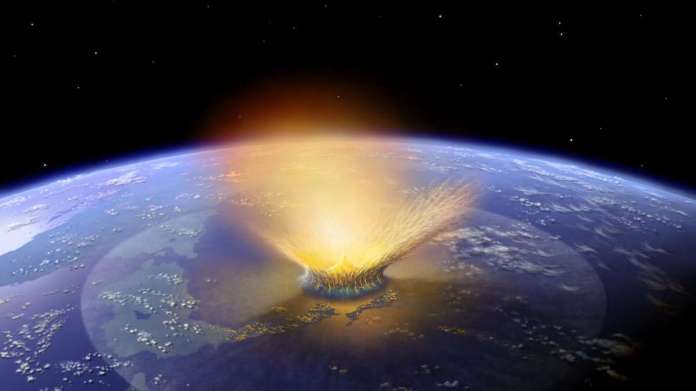 Researchers have been asking this question for some time. A model simulation could now shed light on the darkness.

The  dinosaur ruled the earth in the past.

The irs ended 66 million years ago Dominance across the globe, however, abruptly. Researchers agree that this is due to a cosmic event, more precisely the massive impact of an object that hit the earth and triggered a global catastrophe. But researchers wondered whether the “dinosaur killer” was one Asteroids or one Comets acted.

Asteroid: What Wiped Out the Dinosaurs?

One thing is clear: shortly after A hit of the object, whose crater is still known today as Chicxulub Crater in Yucatan, Mexico, has already died out 75 percent of life on earth. In 2011, a theory that the collision of two Asteroids to have thrown one of them on the earth. Harvard University researchers now have a new theory.

Since inside the crater remains of the Asteroids or Comets which reveal conclusions about its nature, it is already clear that the object must be a carbonaceous chondrite.

The se are extremely rare and large objects that “typically hit the earth at intervals of around 3.5 billion years. That’s too rare for the Cretaceous impact, ”as Amir Siraj and Abraham Loeb from Harvard University state.

The ory Refuted: Did a Comet Wipe Out the Dinosaurs?

The  two researchers therefore estimate that this was the case Object a so-called long-period Comets acts.

The se huge, icy chunks contain carbonaceous chondrites, so the composition would fit. However, time does not play into the hands of this theory either. Comets of this size would only hit the earth every 3.8 billion years.

However, there is in ours Solar system a factor that can increase the likelihood of a comet hit. Namely Jupiter.

The  planet “is comparable to a pinball machine”, as Amir Siraj describes in his abstract. “He hurls those coming from the Oort cloud Comets in trajectories that bring the celestial bodies very close to the sun. ”Due to the strong heat from the sun, the Comet then break into several pieces.

The se individual parts could also fly to earth.

Jupiter as the “pinball machine” of comets

According to the theory of the model, the probability of a hit could be increased by a large Comets increase: 3.8 billion years could therefore only become 250 to 730 million years. “Our study thus provides the basis for an explanation of the Chicxulub event. Because if such a Comet breaks near the sun, an impact like the one experienced by the dinosaurs could very well take place, ”explains Abraham Loeb.

The  two researchers at Harvard University now want to test the theory as soon as they have more data on long-term periods Comets exist. (Marvin Ziegele)

Miracle rescue in the Caribbean: only rats and coconuts – Cubans...

US expert Fauci is massive criticism of the Trump administration

Price development: farmers and trade at one table | NDR.de...