Naomi Osaka won her fourth Grand Slam title at the Australian Open. Versus Jennifer Brady she played out her experience on the big stage.

Naomi Osaka won for the second time in Melbourne

Naomi Osaka gave the mighty silver cup a tender kiss, then she did a lap of honor in the Rod Laver Arena to the cheers of the fans. “It feels incredible,” said the Japanese after she had impressively underpinned her status as a superstar in women’s tennis in the final of the Australian Open and won her fourth Grand Slam title.

The  23-year-old prevailed 6: 4, 6: 3 in 77 minutes against final debutante Jennifer Brady from the USA in a partly nervous final in front of 7381 spectators. “I didn’t play my last Grand Slam with fans, so it means a lot to me to feel that energy,” said Osaka.

She also remained undefeated in her fourth major final – the last time Monica Seles (USA) succeeded in 1991. In Melbourne it is Osaka’s second triumph after 2019. Brady, who is trained by Michael Geserer from Regensburg, missed her first major title.

The  men’s final will contest on Sunday (9.30 a.m. / Eurosport, ServusTV and in our live ticker) record winner Novak Djokovic from Serbia and the Russian Daniil Medvedev.

Like Angelique Kerber in 2016, Osaka managed the feat of fending off match points during the tournament and winning the event. In the round of 16, she faced the end of last year’s finalist Garbine Muguruza (Spain). As a result of this success, Osaka, which also won the US Open in 2018 and 2020, moved up to second place in the world rankings and moved closer to the leading Ashleigh Barty (Australia). “I don’t want to think too much about the ranking,” said Osaka: “It will come if I play well.” Brady also makes a big jump, she will be listed as 13th in the future.

“My tip is and remains Osaka,” national coach Barbara Rittner said before the first serve, and Boris Becker agreed. “For me, she’s the successor to Serena Williams, the next superstar,” said the six-time Grand Slam champion and Eurosport expert. But he also recalled the semifinals at the US Open, which Osaka had only narrowly won in three sets against Brady before they won the title last year.

But the outsider, who had prepared for the season in Regensburg and then had to be under strict quarantine in Melbourne, showed the nervousness in the biggest game of her career. “I have the feeling that I belong at this level and that a Grand Slam victory is completely achievable,” she said after the match, still not entirely dissatisfied, and thanked her team around Coach Geserer.

The  German players had disappointed at the tournament, for the first time since the French Open 2010 the third round of a Grand Slam tournament took place without a representative of the German Tennis Association (DTB). Only Mona Barthel reached the second round.

The  three-time Grand Slam winner Kerber, Andrea Petkovic and Laura Siegemund had already failed because of their opening hurdles

Here the single tableau of women

Charlottenstrasse in Stuttgart-Mitte: man wants to regulate traffic – police are... 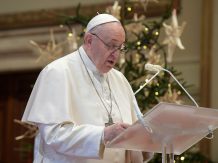 Pope called for brotherhood in a Christmas message – Coronavirus Vienna