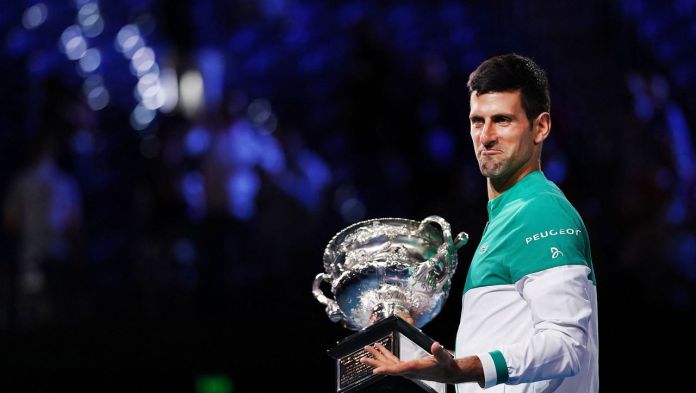 After his final victory, Novak Djokovic spoke about love. It is a love affair between him and the Australian Open, the Grand Slam tournament that he had just won against Daniil Medvedev. It would only grow from year to year, said the man who has now won 18 Grand Slam titles, half of them in Melbourne.
Djokovic is used to delivering victory speeches and they are often full of pathos. Last year, when he also triumphed here, he spoke about the tragic death of basketball player Kobe Bryant. About the devastating bush fires that struck Australia in 2020. In 2021 the topics were easier, the pathos remained the same.
Later, at the press conference, the final itself was quickly ticked off.  The  33-year-old’s appearance was too dominant.

The  clear 7: 5, 6: 2, 6: 2 victory over Medvedev was the result of a match plan that read: attack whenever possible, aim for quick points, always keep control. It all worked out. Medvedev said afterwards about the big three in men’s tennis, which include the Serbs Rafael Nadal and Roger Federer, they are a mixture of man and machine. Djokovic is perhaps more of a machine than a human compared to his two big opponents on the pitch. And at the same time the greater individualist.
Nadal and Federer have both won 20 Grand Slam titles, two more than Djokovic. This race by titles would power all three of them, Djokovic said. “It’s a competition between us. And as long as they are there, I will be there too. «Seldom has the world-class player noticed how much this topic really worries him.

“I want to break records, I want to win more Grand Slam titles than the others,” he said.

Nadal and Federer’s cup collections are one thing, but even Serena Williams’ 23 titles and the still valid tennis record of 24 major tournaments set up by Australian Margaret Court are things he is concerned with. For him, it is not about setting records, but about setting new ones.

One goal ticked off, focus on the next

Djokovic soon achieved that in one category: in two weeks he will break Federer’s previous record of 310 weeks at the top of the world rankings. “It feels like a great relief that I was able to achieve this goal,” said Djokovic. As a result, he wants to adjust his calendar from now on, play a few tournaments and concentrate on the Grand Slam tournaments in particular until the last day of his career. Djokovic looked driven as he revealed his new plans. Driven by the pursuit of records.

Djokovic has been the best tennis player in the world for years. But it often seems that winning matches and titles is not enough for him. At times it seems as if he is also interested in being as popular as his two big competitors. Federer and Nadal, they are not only great athletes, but also great people. Djokovic also has fans around the world, with almost eight million people following him on Instagram. But as popular as the two rivals?

That Djokovic is not that, that he may never be, also has to do with how he performs off the pitch. For example in the course of the corona pandemic. Shortly before the start of the Australian Open, he called for further relaxation for the tennis professionals who were already favored. This earned him some sharp criticism. He also defended the Adria tour he organized, which resulted in infections with the coronavirus (including Djokovic himself), instead of expressing himself critically.

“It was not fair to criticize me without looking properly,” said Djokovic, referring to his controversial catalog of demands for his tennis colleagues in quarantine. “It hurt me too. But in the last few years I have developed a thick skin. None of this has any effect on my performance. This trophy is my answer to all of that. ”

It may be that Djokovic will never achieve the popularity of a Federer, a Nadal. But he can outdo them in terms of sport. And that would bring him a very special form of recognition that nobody will be able to dispute for the time being.

Car demo in Vienna: A lot of support for Indian farmers’...

Corona in Berlin: This is what the Senate’s easing step-by-step plan...

Joint invitations to “breakfast” by Kurz and Neumann – party donations