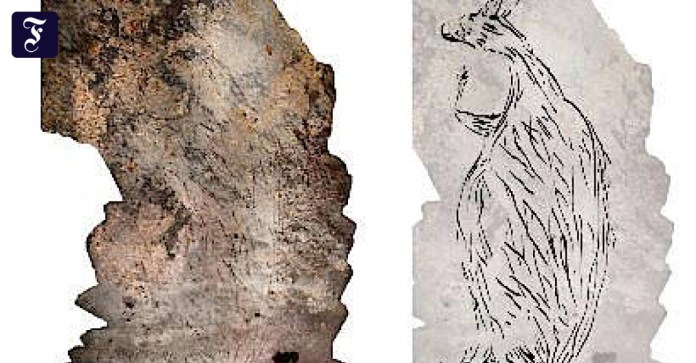 EThe Aboriginal picture of a kangaroo is the oldest known rock painting in Australia. A team of scientists and indigenous peoples found that the approximately two-meter-tall ocher image of the marsupial is 17,000 years old, the University of Western Australia (UWA) reported on Tuesday.

There are references to even older paintings, but only as parts of rocks and pigments, not as complete paintings. According to the scientists, it was not possible to determine the age of the image by examining color pigments. The scientists succeeded in dating the cave painting with the help of the remains of old wasp nests.

The method was developed by researcher Damien Finch from the University of Melbourne. The age of the paintings is checked using the radiocarbon method using mud and coal residues from the wasp nests. The minimum age could be determined by nests on the paintings, the maximum age by nests under the paintings. In total, the researchers examined 27 nests from eight different caves in the Kimberleys, a region in Western Australia known for its rich cave paintings. The kangaroo was determined to be between 17,500 and 17,100 years old, with a probable age of 17,300 years.

In addition to the kangaroo, the researchers also examined 15 other images, including one of a snake and a lizard. The youngest of the images examined was 13,100 years old. The scientists presented their research results for the first time on Monday in the journal “Nature Human Behavior”. Above all, they hoped to gain knowledge about the living conditions of the indigenous people at that time through their research. Around the time the last ice age ended, it was cooler and drier and the oceans were shallower. “It is important that indigenous knowledge and stories are not lost and shared with future generations,” said Aboriginal representative Cissy Gore-Birch.

From their research, the scientists conclude, among other things, that the early Australian rock painters preferred a naturalistic style in which animals and, more rarely, plants were painted. In a later phase, known as Gwion, mainly people were depicted. “Dating the rock painting better enables us to get a better understanding of how the indigenous people lived from their beginnings to the present,” said Sven Ouzman from UWA. The kangaroo motif is reminiscent of rock paintings on Southeast Asian islands and therefore suggests a cultural connection. At the beginning of the year, researchers reported the discovery of the world’s oldest cave painting on the island of Sulawesi. The 45,000 year old picture shows a life-size wild boar.

The Center Pompidou in Paris is currently a futuristic museum machine dedicated to the projections of modernity into prehistoric art. An exhibition that is like a journey through time. 75 million euros paid out in Berlin

1 & 1 cancels all Vodafone tariffs: The message is clear

Is the third corona wave rolling towards Germany? | ...

Animation shows why Corona is probably even worse in Germany