“Schaeffler is not a conglomerate in the traditional sense, but an integrated technology group that serves various sectors,” says the CEO.

The  automotive and industrial supplier Schaeffler rejects a split along the lines of Continental, Siemens or Daimler. “Separating just for the sake of separating is not a coherent concept, even if the stock market occasionally thinks something like that is great,” said Schaeffler CEO Klaus Rosenfeld of the “Süddeutsche Zeitung” (Monday edition).

“Schaeffler is not a conglomerate in the traditional sense, but an integrated technology group that serves various sectors,” he added.

The  activities in the group are usually linked by a common production technology. Schaeffler is currently doing better than it was a few years ago.

The  Schaeffler family controls the majority of the company and is also involved with the automotive supplier Continental. Rosenfeld also refused a close cooperation between the two companies: “Merging everything was not really an issue in the past. That was done.” He is also not interested in the Conti drive division Vitesco, which is currently being spun off. A takeover is not an issue. If Schaeffler were to buy, it would be in the industrial business. “Only buying size in order to get bigger would be wrong. We have to look at what complements and helps us technologically,” Rosenfeld told the newspaper.

Corona mutation B117: Why the danger is hardly predictable – guide 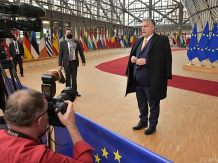