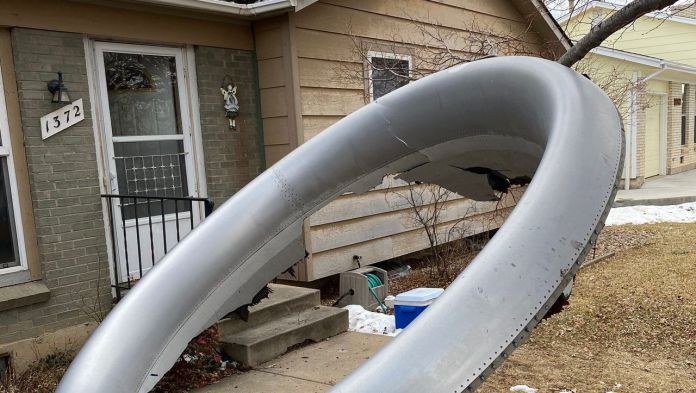 After the engine failure of a Boeing 777 not far from Denver in the state of Colorado, the US aviation authority FAA has announced consequences. Machines of this type, which are equipped with certain Pratt & Whitney engines, should be intensified and checked immediately, said FAA boss Steve Dickson on Sunday and announced a corresponding emergency policy. “This will likely mean that some aircraft will have to be taken out of service.”  The  inspection intervals should be increased.
Meanwhile, the Japanese Ministry of Transport ordered a flight ban for aircraft equipped with the affected engines in their own country as a precaution. This affects 13 aircraft from Japan Airlines (JAL) and 19 aircraft from All Nippon Aiwars (ANA), as the Ministry announced in Tokyo.
On Saturday, as a result of the engine failure, large aircraft parts fell as debris in residential areas over the village of Broomfield, not far from Denver. A large part fell in the front yard of a house in Broomfield, while other parts of the aircraft landed on a sports field.

The  machine was on its way from Denver to the capital of Hawaii, Honolulu. According to the FAA, the right engine of the machine failed shortly after takeoff. On video recordings of a passenger it could be seen that the cowling of the burning engine had fallen off:

United Airlines announced that it is voluntarily removing 24 Pratt & Whitney 4000 Series Boeing 777 aircraft from its flight plan as an immediate precaution. It should be ensured that these aircraft meet the strict safety standards and can be put back into service.

Another bad news for Boeing

It is another setback for the aircraft manufacturer Boeing, which had only come under pressure last week due to possible production defects in the 787 “Dreamliner” long-haul jet.

The  US aviation authority FAA had ordered inspections of around 222 aircraft because there was a risk of damage to so-called decompression panels for separating the passenger area. According to the authority, the defect could have fatal consequences, for example if air freight catches fire.

The  group is already badly hit by the consequences of the corona crisis and the debacle over its best-selling 737 Max series, which was banned from flights worldwide for more than a year and a half after two crashes with a total of 346 deaths. As the group announced at the end of January, the bottom line was a loss of more than 11.9 billion US dollars (9.8 billion euros) in the 2020 annual financial statements – a record loss.

The Elder Scrolls on Netflix! Streaming service works on Witcher...

Why Abbot is not affected Thousands of advertisements for corona violations in Bavaria – health