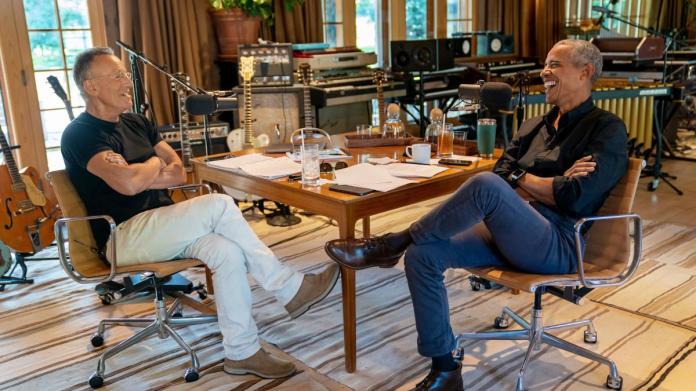 The  former US President now has his own podcast, with rock legend Bruce Springsteen. In it he also describes a shared adventure with the Secret Service.

Dhe former US President Barack Obama and rock legend Bruce Springsteen have launched a joint podcast. In “Renegades: Born in the USA”, the first two episodes of which were released on Monday on the Spotify streaming service, Obama and Springsteen talk about their lives and the state of their country.

The  US is more divided than it was in our lifetime,” Obama said in a preview for the podcast. “How can we find our way back to an American story that brings us back together?”

The  two men know each other from the time of Obama’s first presidential campaign in 2008 and have been friends ever since. For the new podcast series, they sat down for several days in the state of New Jersey, where Springsteen was born 71 years ago.

“On the surface, Bruce and I don’t have much in common,” Obama says on the first episode of the podcast. “He’s a white guy from a small town in Jersey. I am a black man with mixed race parents, born in Hawaii. He’s a rock ‘n’ roll icon. I’m … not that cool. “

When they worked together, however, they had a lot in common, said the former President, who sat in the White House between 2009 and 2017: “We found out during our talks that we still have a firm belief in the American ideal. Not as nostalgia, but as a compass for the hard work that lies ahead. “

The  59-year-old ex-president describes a relaxed collaboration with the singer of the hit “Born in the USA”. “We found some answers, learned a few things, laughed and drank a few glasses.”

The y once went on a trip to Springsteen’s Corvette – and “escaped” the Secret Service bodyguards.

With the podcast, Obama follows the example of his wife Michelle:

The  podcast of the former first lady was one of the great streaming successes of the past year.

Favorite Artists on Spotify: Nobody has more streams than Bad Bunny

Surprise at the end of “RTL Aktuell”: moderators with a special...

Netflix responds to criticism: No warnings on “The Crown”

Media: Alaba is said to be Real Madrid’s “king transfer”

After homicide in Augsburg: arrest warrant against 19-year-olds

Now Frankfurt is missing even more than half a billion euros