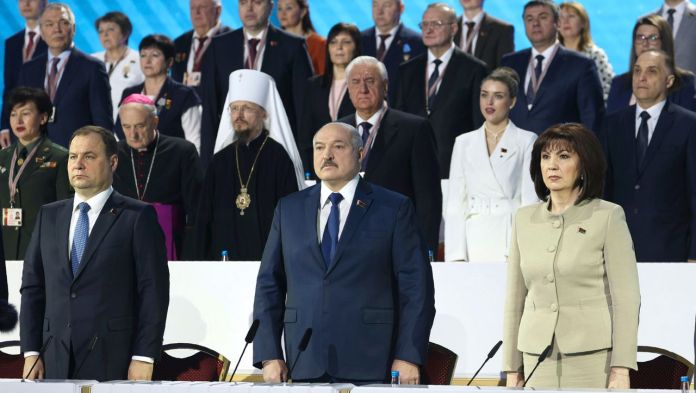 Half a year after the controversial presidential election in Belarus, the ruler Alexander Lukashenko was celebrated as a strong leader by thousands of state officials. At a popular assembly, the 66-year-old, often criticized as the “last dictator in Europe”, confessed that he had sat out the mass protests of recent months.
One day there would be Belarus without him, said Lukashenko. But: “You understand, not today, not tomorrow, not the day after tomorrow.”  The  2,700 handpicked delegates in the hall cheered Lukashenko after a four-hour speech while standing.

At the start of the two-day congress, Lukashenko also announced a new constitution with fewer powers for the president. Original suggestions that the People’s Assembly could vote on the constitutional amendment had long since ceased to exist. Instead, Lukashenko now declared that the people should vote in early 2022. Lukashenko was repeatedly pushed to reform by his neighbor Russia, on whose billions in loans the impoverished Belarus is economically dependent. However, experts doubt that this will lead to real changes.

A new five-year plan should also be approved at the meeting.

The  images of the event broadcast on Belarusian state television, which was held for the sixth time since 1996, were reminiscent of Soviet party conventions.

Lukashenko also quoted the communist revolutionary leader Lenin. He cursed “unfriendly steps” by the West, but at the same time offered to return to political and economic cooperation. While he was speaking, opposition leader Svetlana Tichanovskaya published a list of political prisoners in custody.

In mass protests that lasted for months, hundreds of thousands of Belarusians took to the streets at peak times to demonstrate against Lukashenko and for Tichanovskaya, who they believe to be the true winner of the election. Security forces often used violence against people, with more than 30,000 arrests, hundreds injured and several dead.

The  protests have now subsided.

Film adaptation on Netflix: The tiger bites back

Kim Kardashian and Kanye West: Why the split was foreseeable

Vitamin D has an impact on mortality