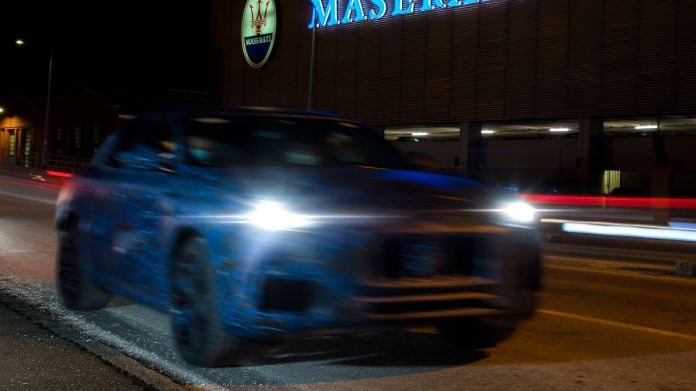 Below the Levant
Maserati Grecale – first pictures of the SUV

Maserati wants to return to its old size and what could help more than a second SUV. Under the name Grecale, a little brother of the Levante is to go to customers at the end of the year. In order to interest them, there are now the first official and slightly blurred images.
Maserati already revealed the name Grecale for a new SUV model below the Levante to be launched at the end of 2021. Now there are the first official pictures from Italy showing a corresponding prototype while driving at the Maserati main plant.

The  intentionally blurred photos give at least a hint of some details.

The re are large air vents and LED headlights at the front, and two-part reflectors can also be seen at the rear, the graphics of which echo the boomerang design of the rear lights of the 3200 GT, built from 1998 to 2001 and designed by Giugiaro. In addition, a roof edge rear spoiler, a sloping roof line and four entry doors can be seen, which is not really surprising.

Technically, the Grecale is based on the rear-wheel drive platform used by Alfa Romeo for Giulia and Stelvio. As with these, the power spectrum of the internal combustion engines in the Maserati offshoot should start above 200 hp and reach well over 500 hp. Maserati has already announced that, in addition to conventional drives, it will also be launching an electric version with the addition of Folgore (“lightning”) for each series in the future. In the case of the Grecale, this E variant, which will presumably be launched in 2022, should have an 800-volt architecture with corresponding fast charging technology.

The  battery could then provide approximately 100 kWh.

According to experts, the DualSense controller has a service life of...

Receiving new signals from space: Researchers are puzzling over origin

The technology bargains of the Amazon Blitz deals from February 10,...

Speech at the UN special summit: Merkel sees light at the...

Five dead and many injured in a rampage in Trier