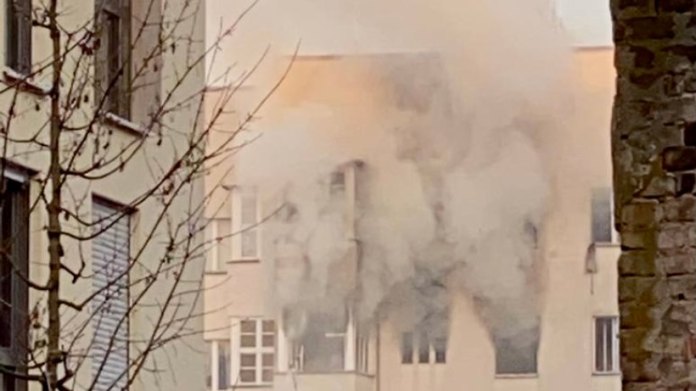 Several people injured in an apartment fire in Spandau

Four apartments are affected by the fire.

The  affected house as well as the neighboring house were blocked by the building supervision.

Berlin. In the event of a fire in an apartment on Mertensstrasse in Spandau several people have been injured, at least one seriously. A fire department spokesman said there was a deflagration in the apartment on the second floor of an apartment building on Saturday afternoon. When the emergency services arrived, the apartment burned in full. First, a person was found with severe burn injuries, three other people were injured more easily according to initial findings.

The  flames spread from the second to the third floor, said the spokesman.

The  fire brigade later announced on Twitter that four apartments were affected by the fire, the affected house and the neighboring house had been blocked by construction supervision. At first nothing was known about the cause and the exact course.

The  fire brigade was on site with around 100 volunteers and professional firefighters.

Man rescues two girls from Havel and breaks in himself

22-year-old injured in attack with knife

Sounds like an announcement: 96 striker Marvin Ducksch is “not in...

The Czech Republic is now extending the state of emergency

Landsberg: Klinikum Landsberg: The corona virus breaks out on a ward

Cause of death known: teen star Archie Lynhurst (19) suffered from...