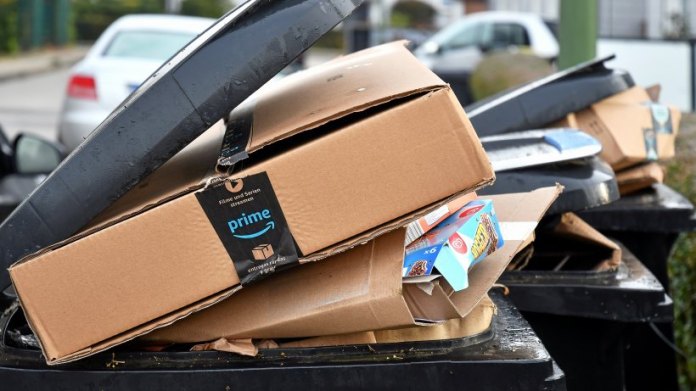 The  fact that Berliners have recently been spending more time at home, shopping online instead of in the store and eating in the apartment instead of in the restaurant has recently also been shown when looking into the garbage cans. Many report that they are fuller than usual. In fact, disposal companies also confirm that the amount of waste generated by private households in Berlin has increased, albeit to a limited extent.

The  Berliner Stadtreinigung (BSR) recorded an increase of two percent in household waste for 2020 compared to the previous year. According to the Statistical Yearbook, the amount of household waste in 2019 was almost 800,000 tons, two percent would correspond to around 16,000 tons of additional waste.

The  BSR was not yet able to provide any figures for the hard lockdown that has been going on since mid-December, but in the “Lockdown light” in the previous weeks, the amount of residual waste had increased by five percent compared to the same period in the previous year. Accordingly, the amount of waste generated by hotels and restaurants decreased significantly.

Even more significant changes can be seen in the case of organic waste and the leaf and garden bins, for which the amount increased by 16 and 24 percent respectively in 2020 compared to the previous year. However, the BSR attributes the increase less to the pandemic. A BSR spokeswoman instead refers to the introduction of the compulsory organic waste bin – both this and the garden waste bin were also intensively advertised. However, slight corona effects cannot be ruled out.

The  disposal company Alba, responsible for the recycling bin in Berlin, also reports a slight increase.

The  quantities in December and January were around two to three percent above the values ​​from the previous year. “This is mainly due to the fact that people were more at home and also ate at home,” says a spokeswoman.

The  changes that Alba reports for the paper bins seem surprising at first glance:

The  weight has decreased significantly, in December there was a decrease of around 18 percent compared to the same month last year. But that is not a contradiction to the impression that paper containers are always full of cardboard boxes, explains the spokeswoman.

The re is a “structural change in the composition of paper waste” that got a boost in the pandemic. Newspapers and brochures are decreasing, while mail order is increasing.

The  cardboard boxes take up a lot of space, the bins fill up faster – but cardboard has “a much lower density than newspapers and magazines”. so the spokeswoman. “Accordingly, the amount collected is significantly lighter.”

Andreas Siepelt, one of the managing directors of Bartscherer, which is also responsible for part of the paper waste disposal in Berlin, also reports on this change in the paper bin. “

The  trend is towards online trading and thus towards packaging,” says Siepelt. As the managing director reports, graphic paper, such as newspapers or advertising inserts, used to make up 70 percent of the weight, while packaging made up 30 percent. “Today the ratio has almost been reversed,” said Siepelt, packaging made up at least 60 percent.

The  development has picked up speed significantly due to Corona – and according to Siepelt, the change will last in the long term. In contrast, the amount of paper waste in industrial areas has decreased significantly.

Stephan Hartramph, Head of Operations and Marketing at Berlin Recycling, has a similar opinion. “People order more, and we will notice that too,” he says. Housing associations among the customers were approached and suggested to increase the emptying rhythm or to set up additional containers. “Many jump on it,” says Hartramph.

The  disposal companies also notice that more people are working at home when the bins are emptied. Although the main streets are emptier and there are fewer traffic jams, the residential areas are much more crowded.

The re are problems in Mitte or Prenzlauer Berg, where the streets are sometimes quite narrow. “

The  fact that more people are in the home office means that parking is happening in the Bötzowviertel, for example, all over the place and close to intersections,” says Hartramph. “But our vehicles have a certain turning circle and then no longer come into the streets, that’s really an issue.”

Corona traffic light stays red even before the turn of the...

Disturbance at the level crossing: delays on the S5 line