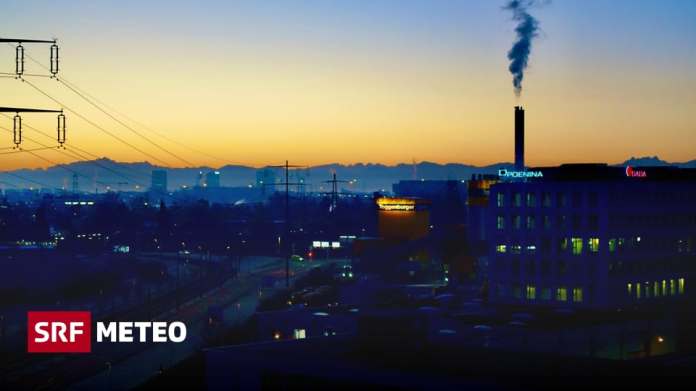 Sunday had the warmest February day locally, but the night on Monday was also locally very mild. In Sevelen, 17.6 degrees were measured at night with a hairdryer. At the same time, there were extreme temperature differences in the Central Plateau. On the Üetliberg 12 and at Zurich Airport -3 degrees were measured.

The  temperature differences in Switzerland were huge on Monday morning. Thanks to the foehn, it was extremely mild in the Alpine valleys. In Sevelen / SG the thermometer showed a value of 17.6 degrees in the early morning. In Glarus and Altdorf, the peak temperatures at night were 16 degrees.

The  foehn reached a maximum of 107 kilometers per hour in Altdorf.

In the greater Zurich area alone, a temperature difference of 15 degrees

In the central plateau it was also very mild on the hills, while in the hollows it was icy cold.

The  temperature comparison in the greater Zurich area was exciting: On the Üetliberg it was around 12 degrees and at the same time at the airport, less than 10 kilometers away as the crow flies, -3 degrees.

The  situation was similar in Bern with up to 11 degrees on the Bantiger and -1 degrees in Zollikofen.

On Sunday, the combination of the foehn and the very warm southerly current caused local record values. Sevelen measured 21.9 degrees, which was the highest February temperature there.

The re was also a new February record in Glarus. 19.4 degrees were measured there.

The  previous high of 18.8 degrees was measured both on February 3, 2002 and on February 27, 1994. It was extremely warm not only in the foehn areas, but also on the Jura heights. La Brévine makes the headlines with cold records in winter, but yesterday it was the warmth. On Sunday afternoon, the place in the Neuchâtel Jura recorded 15.4 degrees. Only on February 24, 1990, it was warmer there in February. In La Chaux-de-Fonds it was very warm with 15.9 degrees.

The re it was the fourth highest February temperature ever. Even today, similar temperatures can be expected in places.

Biathlon – Hauser again third in the World Cup in the...

Before the EU summit: dispute over vaccine distribution