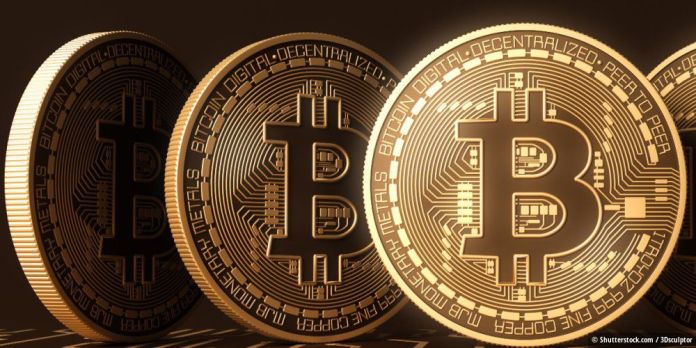 
Bitcoin has surpassed $ 55,000 in value.  The  market capitalization reaches a record high.

Bitcoin is currently on the rise again

Bitcoin’s soaring also continued over the weekend: Just a few days after the value of 50,000 US dollars was exceeded, Bitcoin has now also broken the 55,000 US dollar mark and is now heading for 60,000 US dollars. According to the crypto news portal Coindesk, the value of Bitcoin is currently around 56,400 US dollars (as of February 22, 9:30 a.m.). This corresponds to a value of around 46,500 euros per bitcoin.

On Sunday, Bitcoin was already worth more than 58,000 US dollars, and 58,332.36 US dollars were registered as a new all-time high. Since the beginning of the year, the value of Bitcoin has almost doubled. Exactly a year ago, a Bitcoin was worth around $ 9,800.

Bitcoin is currently more valuable than companies like Alibaba, Facebook and Tesla. According to Companiesmarketcap.com, there are currently only five companies that have a market capitalization of over $ 1 trillion. Apple ranks first at $ 2.18 trillion. Breaking the 1 trillion mark, Coindesk explained, is an important milestone for Bitcoin to become a “significant part of the global financial ecosystem”. After all, the open protocol is already more valuable than Facebook and could soon overtake the Google parent company Alphabet.

The  development is being spurred on by the fact that more and more large companies want to support Bitcoin as a means and system of payment. For example, Tesla and Mastercard had recently announced this.

Bitcoin Pizza Index at over $ 565 million

The  Bitcoin Pizza Index is currently just under 565,825,000 million US dollars.

The  origin of the Bitcoin Pizza Index:

The  developer Lazslo Hanyec announced in a forum post on May 19, 2010 that he was willing to buy more than one pizza for 10,000 Bitcoin.

The re should be at least two pizzas so he could have another pizza the next day. In the forum post he called on all readers to make him an offer. On May 22, 2010, a seller was finally found who was willing to exchange two pizzas for 10,000 Bitcoin. Since then, May 22nd, 2010 has been considered the day on which, for the first time in the real world, a transaction for a commodity was paid for with Bitcoin.

Blockchain: This is how the Bitcoin basis works

When does the health insurance fund pay for the trip to...

Kanye West and Kim Kardashian are said to be facing divorce

After Anna Faris’ Exit: The series “Mom” ends after the eighth...