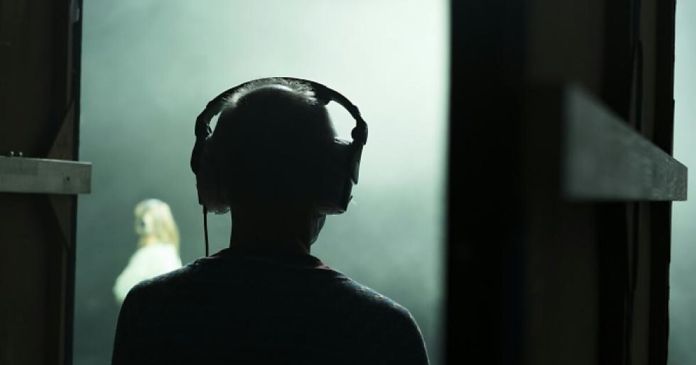 The  audio tour is perfectly done and strictly timed. It is wise not to let your thoughts wander too much, because instructions can come at any time that you have to follow immediately. Since “Black Box” follows the principle of a single long live recording, you occasionally receive commands such as “Freeze”, “Close-Up”, “Tracking”, “Pan” or “Action”. If you don’t open the right door, turn to the right side and move in the right direction in the stairwells, you can quickly get lost. For safety, the headphones have an emergency telephone number. But the instruction staff at the start assures that no one has ever called. Sleight of hand.

The  course has only just begun. As the seventh of 55 people that afternoon, you set out on the journey.

First you have to sit in the former cash register. It won’t remain the only mini-room, because you can also go into a smelly basement room where the cooling system is located, into the tiny prompter box or into the last quiet place where the actors can relieve themselves before their big performance . For a long time it is really the promised exciting tour of discovery “through all corners of the house behind, under, above and on the stage”. In the restored, listed “Führerzimmer”, you can imagine attending a conceptual rehearsal, you get a glimpse of the tailoring, the new mask, the prop, and you meet the only living person at the new reception with the porter (“Please do not address”) and can take a drink from the ice chest in the conference room. What you don’t see are the new actors’ dressing rooms, and the director’s room is also left on the right.

To do this, you go to a technical bridge, to the lower stage, to the stage manager’s desk and even to the stage itself. On the side stage you can spread theater fog at the push of a button before you have to prepare for your performance in the “alley” Ear a conversation between Doris Weiner and Hasti Molavian about stage fright and fear of performing.

The n the step into the spotlight and from there the view into the black hole of the auditorium. When you practice the bow shortly afterwards, you know that you had at least two spectators on your Volkstheater stage debut: the tour participant in the auditorium and the one in the prompter.

Via the VIP lounge and the mayor’s box you go to the Rote Bar.

The re you will find a small piece of paper with a message that the previous woman left. It says (in the case of the reviewer): “See you soon in the wonderful theater illusion machine!”

The re is nothing to add. And until then, enjoy the illusion that it is only being started for you in the “frame of the box”. Go there! Look at! Let yourself be enchanted!

“Enormous decrease in the number of passengers” due to taxi tariffs

Alpine skiing: Feuz now has to fight his former sponsor

Seven Austrian universities in the top 50

Another dead in protests in Myanmar

Greensill Bank: the next Wirecard case?

Frankfurt: Corona stopped Antonio Romero: This boy (9) is a musical...

Weather in Germany: Brutal winter turnaround due to phenomenon? Polar...

Burning questions and answers about the available corona vaccines