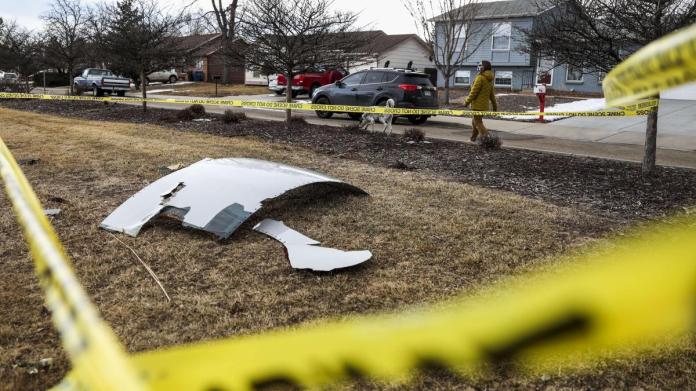 Shortly after an aircraft took off in the USA, an engine failed and huge parts fell to the ground. A similar incident occurs in the Netherlands, where two people are injured.

Et is a horror scenario: On a Saturday afternoon, large parts of the airplane detach from a Boeing 777 with more than 240 people on board. Not only a nightmare for the people on the plane, but also for those on the ground.

The  aircraft parts crash into a residential area not far from the US city of Denver in the state of Colorado.

“I’m honestly shocked,” said Broomfield police spokeswoman Rachel Welte. It is “astonishing” that, according to initial findings, no one was injured by debris in the place. Curious: there was a very similar incident in Maastricht in the Netherlands over the weekend. However, two people were actually injured.

According to the US Federal Aviation Administration (FAA), the right engine of the United Airlines (UA) machine failed shortly after take-off.

The  231 passengers and ten crew members were en route to the capital of Hawaii, Honolulu. It was initially unclear what led to the engine failure.

The  incident is being investigated, the FAA said. United Airlines announced in the evening that the majority of passengers are on another flight to Hawaii.

A large piece of debris fell in the front yard of a house, other parts of the aircraft landed on a sports field. Police spokeswoman Welte reported that the people were particularly startled by the noise. “A lot of people said they heard this really loud explosion that scared a lot of people, and then they saw what they thought was an airplane falling from the sky, but it was debris.”

Kirby Klements told the Denver Post that he was sitting with his wife in the living room reading the newspaper when there was a loud bang. At first he thought that it was part of a trampoline. When he went out, he immediately recognized that part of the engine of an airplane had landed in his front yard. “It rained a lot of debris from the sky,” said Klements.

It sounded like the sound barrier had been broken, eyewitness Kieran Cain told CNN. Everyone looked up. A “gigantic” cloud of black smoke could be seen in the sky – and immediately afterwards the falling parts of the aircraft. “Virtually a shower of pieces falling from the sky,” said Cain.

A passenger on the UA flight, Travis Loock, heard a “big bang, the kind of noise you don’t want to hear when you’re on an airplane” around 20 minutes after departure. After pulling up the cover, “I was quite shocked to see that the engine was missing on my side,” CNN quoted the passenger as saying. He could feel the fear among the passengers, but everyone remained “very calm”. After landing safely in Denver, passengers cheered before disembarking.

The  broadcaster CNN played a recording of the dramatic moment in which the pilot of the plane released the distress signal “Mayday”. According to some experts, an engine failure is more likely shortly after take-off. This has to do with the fact that the pilots would have to request so much power from the engines at this point in time to get the plane in the air, said former US Department of Transportation inspectorate chief Mary Schiavo.

The re were similar reports from the Netherlands on the same day. According to the Maastricht police, an elderly woman was hit in the head and had to be treated in hospital. A child was also reportedly slightly injured and burned when trying to pick up debris from the floor.

According to the police, a fire broke out in one of the four engines of the machine.

The re was no evidence that the events in the Netherlands and the USA were related.

Austrian speaks plain language – Hirscher on comeback: “No chance and...

Corona: Expert on the IT problems in Switzerland

Corona: Extension of the shutdown likely