Many pilots and flight attendants around the world swear by this saying on jets from the American manufacturer. But after a series of serious accidents and accidents, passengers’ confidence in Boeing planes is waning.

It was not until the weekend that videos and photos of the burning engine of a United Airlines Boeing 777 on the way from Denver to Honolulu shocked. Debris rained to the ground after the engine explosion, the pilots made an emergency call, 23 minutes after take-off the pilots were able to land the jet again, none of the 231 passengers and ten crew members were injured.

And that’s just the end of a long series of accidents and mishaps over the past two and a half years. Read the chronology with BILDplus.

VW calls cars back – this model poses a fire hazard!

Tobi Wegener: These celebrity women are turning his head – People

Medical masks as a must: This is how much FFP2 masks... 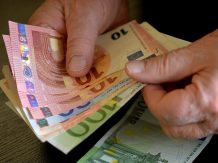 Corona tax debts can be paid for longer – Coronavirus Vienna