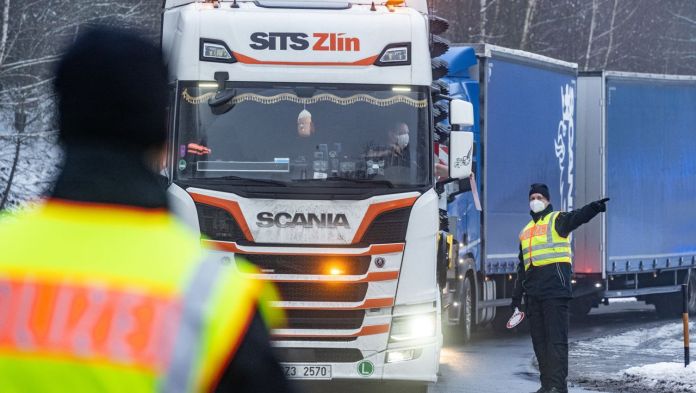 The  truck drivers stand in the nocturnal drifting snow: behind a flutter, closely packed next to and behind each other. Some wear breathing masks, others don’t.

The  queue of people at the Czech motorway service station Rozvadov is likely to be around a hundred meters long.

“We stand out here like dogs: at ten degrees below zero,” says the man making the video in Spanish. “I’ve been waiting in the crowd for an hour and a half. I have about four or five hours left. ”

It is the night from Monday to Tuesday, and truckers in Rozvadov are waiting for their corona test in front of a hastily built test center. So that they can finally get into Germany. Unless they get stuck in a traffic jam at the border.

Other / not not assignable

In the past months of the pandemic, the trucks had free travel within the united Europe. You could usually cross the borders without any problems. After some countries closed themselves off for a short time in the first wave, the EU campaigned for the smooth transport of goods in order to secure supplies and prevent supply chains from breaking.
But now the federal government has drastically tightened its border controls for entry from the Czech Republic and Tyrol in the fight against the virus and the latest mutants. Since Sunday, all truck drivers have had to show a negative corona test and an entry registration – and then, theoretically, go into quarantine in Germany.

The  order from Friday caught many truck drivers off guard. You have long been on the road – and now you have to find a test at short notice.

The re is chaos: not just at the borders with Germany, but well in front of it. Because now Austria and the Czech Republic are also restricting transit traffic in order not to let the backlogs get out of hand. In part, they in turn require current corona tests. And so photos from Sterzing, Italy, on the Brenner autobahn, show hundreds of truckers huddled in front of a test center.


Queue in front of the test station in Sterzing, Italy

“Our industry supports measures to curb the spread of the coronavirus,” says Matthias Mädge. “But if hundreds of drivers have to line up shoulder to shoulder in front of test centers at the borders, then it’s dangerous.” Mädge is the political director of the International Road Transport Union, the world association of road transport companies. He considers the order of the federal government to be counterproductive and thoughtless.

SPIEGEL: Mr Mädge, Germany has drastically tightened the entry requirements for trucks. How do you like that?

Matthias Maiden: We are deeply disappointed and angry. On Friday, EU Commission President Ursula von der Leyen replied in writing that she wanted to leave the borders open for freight traffic. But then a one-sided and thoughtless, stupid decision on the German side led to chaos.

The  German government did not prepare this action; no help comes from her. We receive messages every minute from drivers who are standing in traffic jams that run for miles or queues for hours in front of corona test centers.

The se people are left hanging.

To person
SPIEGEL: But truck drivers can also transmit the virus.

The  industry has implemented comprehensive hygiene concepts that minimize all human contact.

The  drivers are isolated in their vehicles; and they themselves often have nothing to do with loading or unloading. If someone is not a source of risk, it is the truck driver. Our industry supports measures to contain the spread of the coronavirus. But if hundreds of drivers have to stand shoulder to shoulder in front of test centers at the borders, then that is dangerous. And on top of that, an unworthy treatment of these people.

The  temperatures are below zero and we let the drivers stay out in the cold for hours. Don’t forget: it’s the trucks that ensure our supplies of food and other essential goods.

The  automobile association VDA is already warning of factory closures due to lack of deliveries.

“A unilateral and thoughtless, stupid decision on the German side has led to chaos.”
Girl: Rightly. Large parts of our economic system are highly dependent on rolling freight traffic. And some of the most important routes in Europe are currently being hit: the north-south axis over the Brenner with up to 10,000 trucks and the east-west axis over the Czech Republic with 25,000 trucks per day. This can destroy supply chains and paralyze entire companies – not just in the automotive sector. It could also happen that supermarkets no longer offer certain products.

SPIEGEL: That sounds a bit like scare tactics. So far there has been little to see of empty supermarket shelves.

Girl: It may well be fine for a few more days. But it could also happen that panic buying starts again and the supermarket shelves empty quickly. In this situation, nobody can predict what will happen. It all depends on how things develop at the borders – and whether our drivers get help.

SPIEGEL: Who are you hoping for help from?

Girl: Especially from Brussels. A few months ago, the EU states including Germany agreed to give priority to freight traffic in the pandemic in order to secure supplies. How can it be that now individual members go it alone?

The  safest solution for everyone is that drivers can do their job and cross the border unhindered. Now the EU can show what it’s good for.

First comes the snow, then the storm

Australian Open: Novak Djokovic – “If it wasn’t a Grand Slam...

Corona: EU wants up to 300 million more vaccine doses from...