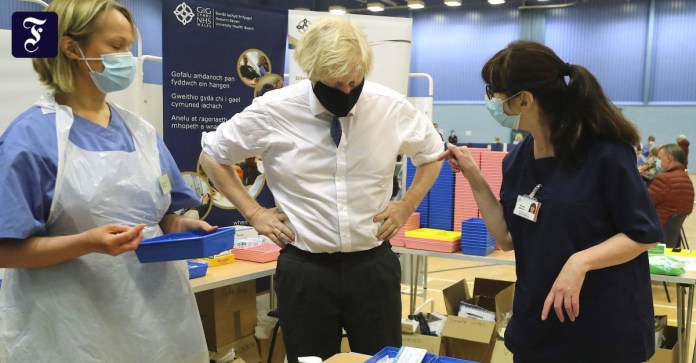 Dhe British Prime Minister Boris Johnson wants to present a plan for the end of the week-long Corona lockdown in England on Monday. Johnson has announced a “cautious” exit. It is already known that residents of retirement and nursing homes will be able to receive visits from selected relatives or friends again from March 8th.

It is expected that the schools will open on the same date. In addition, meetings between two households outdoors and outdoor activities such as golf or tennis might initially be possible. “Our priority has always been to get children back to school as it is critical to their education and their mental and physical health,” Johnson said, according to a statement. “We will also create ways in which people can safely meet their loved ones.”

For retail and hospitality, it will be even longer before they are allowed to reopen. All further easing steps should depend on the successful further progress of the vaccinations, a manageable infection situation and that dangerous corona variants do not spread any further. Since the health sector is a task of the regional governments, Johnson can only decide for the largest part of England. Scotland, Wales and Northern Ireland determine their corona measures independently.

The  infection situation in Great Britain has improved significantly in the past few weeks, but remains at a very high level. 9834 new cases were reported on Sunday.

The  statistician David Spiegelhalter from Cambridge University, who is also on the government’s scientific advisory body, emphasized that it was important to allow sufficient time to pass between loosening steps in order to be able to recognize the effects on the infection situation. “Things can change and we have seen that they can change very quickly, and that’s very worrying,” Spiegelhalter told Times Radio. Republicans in USA face impeachment in the clutches of Donald Trump Marriage to Uwe: Natascha Ochsenknecht was barely allowed to spend any...

Alpine rebel back on polarization course: Gabalier is raising the mood...