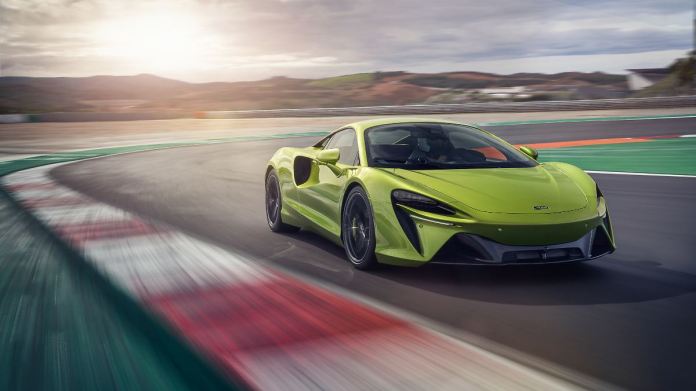 McLaren wants to get around the corner and is now turning onto Electric Avenue. However, the British do not completely turn the steering wheel and with the Artura are bringing a top athlete with a plug-in drive. For the British, technology is a small revolution, but design is just evolution.
England seems downright electrified: First Bentley announces the goodbye to the combustion engine, then Jaguar and now McLaren is pushing the charging station. Because when the British launch the Artura, which is available at prices starting at 226,000 euros, they too will take the first few meters on Electric Avenue and will at least provide the petrol engine with an electric motor for short trips. This is by no means as consistent as with Bentley or Jaguar, where the reciprocating engine is completely withdrawn.

But that is a big step for the super sports car segment. Apart from a few exclusive and extreme exotic cars such as the Porsche 918 Spyder or the Ferrari SF90 Stradale, it is the first sports car of its kind that can be charged from a socket. This means that McLaren is in pole position ahead of Aston Martin, Porsche, Lamborghini or Ferrari – no wonder that company boss Mike Flewitt speaks of a milestone not only for McLaren, but for the entire segment. And even if the 5.5 liter standard consumption is pure poetry from the test bench, the Artura is undoubtedly more efficient than its conventional competitors. This is one of the reasons why they put a “Futura” in their name alongside “Art”.

For this purpose, not only was an electric motor integrated, but the entire drive system was also redesigned:

The  last four-liter V8 is history and makes room for a six-cylinder with a three-liter displacement that generates an impressive 585 hp. At his side is an electric motor with 95 hp, which is integrated in the also new eight-speed automatic. It is fed by a battery with a usable capacity of 7.4 kWh, which can be charged at any household socket within 2.5 hours. Alternatively, the battery also uses excess engine power and thus fills up while driving.

If you want to please your neighbors or relieve emissions-plagued city centers, you can start silently with the Artura at the push of a button and stroll up to 30 kilometers and thus reach the local limit at least everywhere – except in Germany. Because the Stromer also manages 130 km / h on its own.

Unlike SUVs and sedans, the plug-in for sports cars is less about kilometers than about kilograms. Because more important than the greatest possible range for the engineers is a low weight. And here, too, McLaren has achieved a lot. Including the 15 kilograms for the electric motor and 90 for the battery, the entire plug-in system weighs only 130 kilograms and, with a dry weight of 1.5 tons, the Artura is lighter than many super sports cars with conventional drives.

The  driving performance is correspondingly impressive: when a total of 680 hp and up to 720 Newton meters tear at the rear wheels, the 100 mark falls after three seconds, even 200 km / h is reached after 8.3 seconds and the end is only at 330 km / h.

The  drive may be a revolution for McLaren, the appearance is more evolutionary. Because even if the carbon chassis is completely new and this time baked in-house, the 4.54 meter long, 1.98 meter wide and 1.19 meter flat Artura looks terrifyingly similar to the conventional coupés. Only inside are there digital instruments, an infotainment screen that floats like an oversized smartwatch in front of the center tunnel, and the key buttons for setting up handling and performance. Meanwhile, they are placed in such a way that you can reach them with your hands on the steering wheel.

Even if McLaren makes the first few meters on Electric Avenue with the Artura, the British don’t want to say goodbye to the old world anytime soon. Company boss Flewitt also wants to continue working on the combustion engine until at least 2030, which should please some.

Husband gives his wife a giraffe hunt for Valentine’s Day in...

Munich: fraud in the millions with Corona emergency aid – 31-year-old...

PS5: Confusion chaos after release – thousands are playing the wrong...