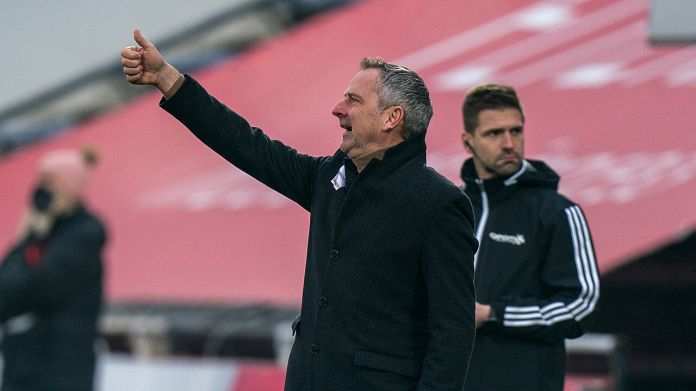 Thomas Goiginger got through in the 86th minute on Johannes Eggestein, who started clearly from the offside, the German also clearly went to the ball, only at the last moment he turned away and left the leather to Goiginger, who had started himself and dry past Leitner intermittent 2-0.

A situation that is very difficult to assess with the help of the video images and which leaves questions unanswered after the game.

Hit for Buric not regular

For Admira coach Damir Buric, the goal is clearly not regular: “ The  second goal was one that would not have been possible for me.

The  pass was intended for Eggestein, who ran with the ball and only withdrew at the last moment. He was clearly active on the ball and the flag was raised. “

Since Eggestein did not touch the ball, the referee’s decision was probably correct. Even if LASK coach Thalhammer speaks of a “dubious” goal.

No problem with the decision to give the goal, goal scorer Goiginger explained his point of view in the “Sky” interview after the game: “I thought that Jojo (note: Eggestein) might be on the sidelines and no one really follows , then I just ran and yelled at him. I tried it, it worked, so of course I’m happy. “

(Text continues after the VIDEO)

The  1-0 goal scorer, Andreas Gruber, who was exchanged after just under fifteen minutes, caused concern for the Linzers despite the success (more info >>), who won their third league game in a row with their victory in Maria Enzersdorf.

Goiginger, who has only been fit again for a few months after a serious knee injury, wishes his offensive partner all the best: “I hope it’s not that bad. I only hope for the best that it might not be the cruciate ligament after all . “

The  LASK officials did not provide any more detailed information about the injury after the game. An initial diagnosis in Südstadt confirmed the suspicion of a serious knee injury during the game’s half-time break.

Admira wants to build on performance

On the Admira side, they are particularly satisfied with their performance in half time after the game. Since the Südstädter could always cause danger in front of the box of Tobias Lawal, who guarded the goal instead of the ailing Alexander Schlager.

“In the first half we stood up to LASK. We started high and had our chances, but unfortunately got an easy, cheap goal. We didn’t allow a lot against a top team, but unfortunately didn’t use our chances. We can perform we’ll take with us for the next games, “says Buric, knowing how the narrow defeat came about.

The  Admira continues against WSG Tirol on Saturday. LASK also expects TSV Hartberg in the home game on Saturday. For both teams, a game day on which the points account could be topped up accordingly.

New start in the Mediterranean and Germany

Corona lockdown: These rules apply in Hesse – incidence in Offenbach...

Small van slams against a tree in Rahnsdorf – BZ Berlin

Decisive game in Switzerland: First get the EM ticket, then pity...