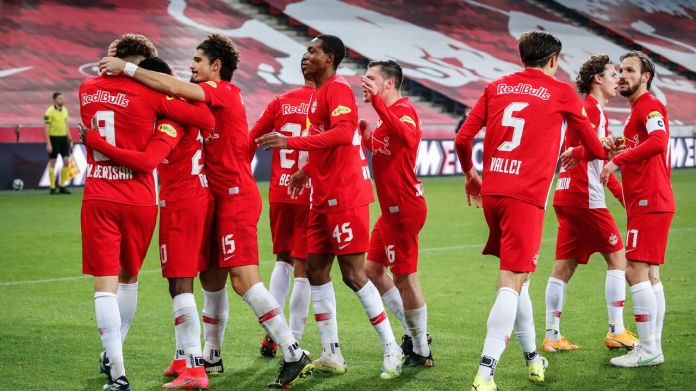 What a show of force by the Austrian serial champions in the top game of the 18th Bundesliga round against the record champions and first pursuer Rapid Vienna!

What looks relatively harmless on the game data sheet with a 4: 2, could have resulted in a more bitter evening for Rapid with a better chance of Salzburg or without a strong Richard Strebinger in the goal of the Green-Whites.

Above all, the offensive of the Mozartstadters around triple packer Patson Daka and the four-time preparer Mergim Berisha could once again stand out. After the disappointment during the week in the Europa League against Villarreal, coach Jesse Marsch can also look forward to reparations.

Joker shone from the start

Salzburg coach Jesse Marsch is delighted with the strong performance of his team in an interview with “Sky” after the game. “It was a dominant performance from start to finish, I’m very happy with the guys,” said the American. “We clearly understood how important it was to score in this game.”

The  47-year-old does not want to commit himself to a “Man of the Match”: “Both (note: Daka and Berisha) were really strong.” Instead, he particularly emphasizes another high performer. “Brenden Aaronson actually comes from the bench and has to react so shortly before the game. To show such a performance, that was outstanding”, praised the coach of the young American signing, who was in the starting line-up for Okafor, as he spent a quarter of an hour injured while warming up on the abductors before kick-off.

The y are a good team, but we thought that there was more in it. “

The  fact that this young squad reacts so well after a disappointment, I think that says a lot about the team,” said Marsch .

The  gap to the Hütterldorfern, who are the first pursuers in the Bundesliga, is now six points. But Jesse Marsch sees a factor that seems even more important to him than the current table situation.

The  table is not that important, the feeling that you can play so well against one of the best opponents is much more important to me. Now we have to continue to play with such intensity and aggressiveness”, the RB coach sums up.

Gate for the blocked colleague

Triple packer Patson Daka clearly sees the key to today’s success in the “good team performance”. “Without the team I wouldn’t have scored three goals today,” said the 22-year-old.

Sekou Koita, who was absent from Mozartstadt for months due to a doping ban, spoke to Daka again before the top game. “Patson, you have to score for me today”, Daka quotes his teammate.

This is how the man from Zambia also dedicated his first goal celebration to his striker colleague. “Everyone is waiting for the boys to come back (note: Camara and Koita).”

Donald Trump is apparently thinking about a new party

Coller Capital (study): More than half of all institutional private equity...

LEGO Super Mario: Nintendo presents the builder set in its own...