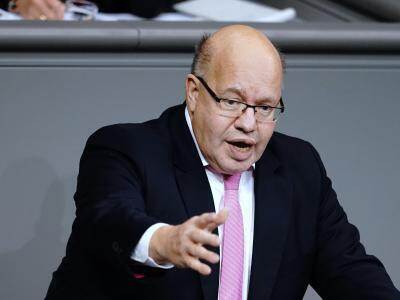 Representatives from more than 40 associations are to take part in an online “economic summit”. In the run-up to the meeting, Altmaier warned of the consequences of a possible third corona wave for companies. “

The  economy cannot flourish if we get a third wave of infections,” said Altmaier on Tuesday in the ARD “Morgenmagazin”.

The refore everything has to be coordinated to open up the economy, but at the same time avoid a dramatic situation like in neighboring countries.

Self-tests could definitely help, says Altmaier. In addition, according to the minister, there are “many other levers” that he would like to talk to representatives of the associations about this Tuesday.

The  Corona “economic summit” should be about the crisis, the latest resolutions by the federal and state governments, the aid programs and possible opening perspectives, for example for trade and the hospitality industry.

The  economy demands more reliable planning for the relaxation of restrictions.

The  further extension of the lockdown until March 7th was sharply criticized by the affected industries. Associations complain about sluggish aid payments and too much bureaucracy.

The  conference had to be more than a consolation summit, said the chief executive of the German trade association, Stefan Genth. He expects real perspectives and effective aid packages from Altmaier.

Green party leader Katrin Göring-Eckardt called for more help for the self-employed and freelancers. “In addition to faster and better support for companies, help for freelancers and the self-employed must finally be placed at the center of crisis policy,” she told the German press agency.

Almost every tenth employee in Germany is self-employed, said Göring-Eckardt. “How much the federal government lets this part of the economy down is a crisis in a crisis. For many self-employed people, from cultural workers to taxi drivers, there has been a state of emergency and an existential crisis for almost a year. ”

For Bridging Aid III, after its start last week, 34.6 million euros have been paid in advance by the federal government, as the ministry announced on Monday. In the case of aid for November and December, six billion euros have now been transferred in advance payments and regular payments.

According to FDP leader Christian Lindner, the meeting should be more than a PR event for the federal government. “Tens of thousands of companies struggling for their economic existence need concrete results from the stagnant economic aid and a reliable opening perspective,” said Lindner of the German press agency.

In addition, according to Lindner, the federal government should finally give up its resistance to the expansion of loss carry-back and introduce unbureaucratic depreciation options for seasonal goods in retail. At the center of the summit must be the binding opening perspective for the economy. Against the background of the current infection situation, regionally differentiated openings are now appropriate and justifiable.

“Games without fans are off the table”

Outlook: Lennar presents figures for the most recent quarter | ...

Unioner with staff concerns: Gentner is missing in Stuttgart