A driver caused a serious accident in Rottenburg am Neckar on Friday.

The n he fled the scene of the accident and left his two passengers behind.

A driver got off a road late on Friday evening in Rottenburg am Neckar (Tübingen district) and fell about four meters into a water retention basin with his car. He then fled the scene of the accident and left his two passengers behind. One of the two, a 22-year-old, suffered serious injuries, the police said on Saturday. An ambulance took her to a clinic.

The  second passenger was unharmed.

Inmates had only met shortly before

The  two women had probably only met the driver shortly before the accident at a gas station. A little later he came off the road at too high a speed – according to the officials, probably out of pure display. Later he broke through a site fence and fell into the pool in the Tübingen district.

The re the car stayed on the roof.

The  driver and the two women then climbed out of the vehicle themselves.

The  still unknown man walked away from the scene of the accident and then got into a car.

The  search for the fugitive was in full swing, it said.

Figures on e-mobility worldwide: Germany is catching up – economy Lobby register: The Union wants it to be a little more transparent – politics

Whatsapp will soon allow video and voice calls on the desktop

Payouts from Covid-19 funds for artists will be increased

Benjamin Pavard at Bayern in form of low – now Willy... 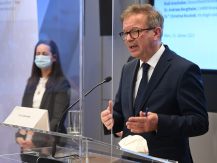 Donald Trump gets a second impeachment

Apple iPhone: cooler and smaller – the company is preparing a...