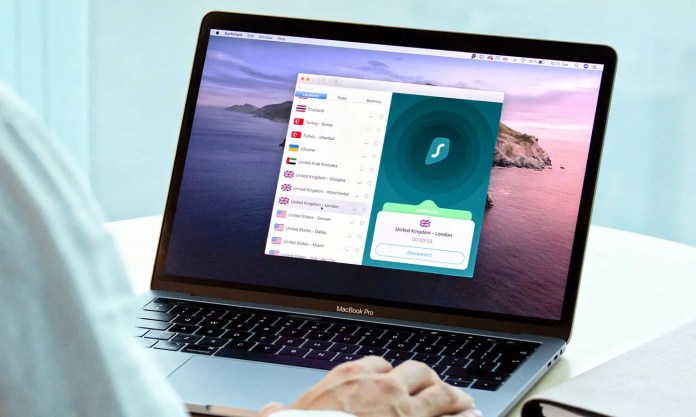 The re are a few to consider. – (C) Surfshark.com

Anyone who plays online multiplayer games has certainly already had this experience: Cheater.

The y are particularly common in shooters. Aimbots and wallhacks there are plenty to download on the net, and big publishers like Activision in Warzone can’t catch everyone.

In today’s world of online gaming, hackers are redesigning the underlying code of online gaming in order to give fraudsters an unfair advantage. In single-player titles, a God mode was used to rediscover the game world, while cheats and hacks for online multiplayer games are just one thing: unfair to other players.

Ruining the game affects both gamers and game developers. And hackers do not shy away from attacking fair players by reading out their IP address. This is followed by DDos or similar line attacks. But there is a safer way to play online via VPN*. This not only protects your privacy, but also your IP.

The  principle is simple: Those who cannot find you cannot attack you either.

Which online multiplayer games have the most cheaters / hackers?

The  video game with the most cheated videos on YouTube is clearly Fortnite, according to Surfshark.com.

The re are a total of 26 million hits for YouTube videos by officially cheating on Fortnite.

Fortnite has three times as many fraudsters as second place, Overwatch.

The re were over 9.2 million hits in Blizzard’s tactical shooter. With 6.7 million hits, Counter-Strike: Global Offensive is in third place, ahead of Call of Duty: Warzone with just under 4.2 million hits.

Which is more popular? Wallhacks or Aimbots?

The  answer is very clear: Aimbots that had twice as high queries as wallhacks.

Where are most of the cheaters traveling? Fortnite leads in this ranking ahead of Overwatch and Counter-Strike: Global Offensive. – Image source: Surfshark.com

Where in the world are there the most cheaters in online multiplayer games?

Who is the world champion in cheating? According to the Surfshark ranking, there is a country that was able to secure the “world champion title”: Sweden.

The  United States of America and Australia are in second place.

It has to be said that esports has a different meaning in the Nordic countries than in Germany, Austria or Switzerland. Some of the best esports athletes in the world come from Sweden, there will be some children who would like to emulate their idols and use cheats.

Where are cheats used most per resident in online multiplayer games? – Image source: Surfshark.com

How do hackers cheat in first person shooters?

Hackers cheat by accessing the underlying code and memory of online games to give themselves special powers while playing.

The  most common forms of fraud are Aimbots and Wallhacking.

How does an aimot work?

On Aimbot helps the player to aim at enemy opponents.

The  crosshair automatically moves to the target.

The re are Aimbot-Program the other players are also out of sight.

Another shape is a Triggerbot. This automatically shoots at the enemy as soon as he is in the crosshair.

The  combination of Aimbot and Triggerbot is fatal for opponents.

How does a wallhack work?

The re are also different variants here, such as a Wallhack is working. Most of the time it boils down to seeing enemies behind walls or boxes. Whether the walls are displayed transparently or the opponents are displayed in bright colors depends on the cheat program.

Fortnite is very popular, so most of the cheaters and hackers are here too. – (C) Epic Games

Why should you play online multiplayer games over VPN?

The re are a few reasons why you should do this, which we list for you here:

Is online gaming over VPN suitable for everyone?

If you play games like Minecraft or League of Legends who rely on dedicated competitive servers, then a VPN solution is definitely advisable.

Surfshark offers you safe online games for just under 2 euros a month.

The re is currently a special offer with which you can save 81% when you take out a 2-year subscription.

* Affiliate link: We get a small sales commission if you buy something via this link.

The re are no further costs for you.

FC Schalke 04 and coach Christian Gross: The attempt with number...

Corona lockdown: Hubert Aiwanger: “The curfew is no longer appropriate”

Christina Perri: After breastfeeding: “We are not okay”

THE AUTO WEEK – those were the most important topics |...