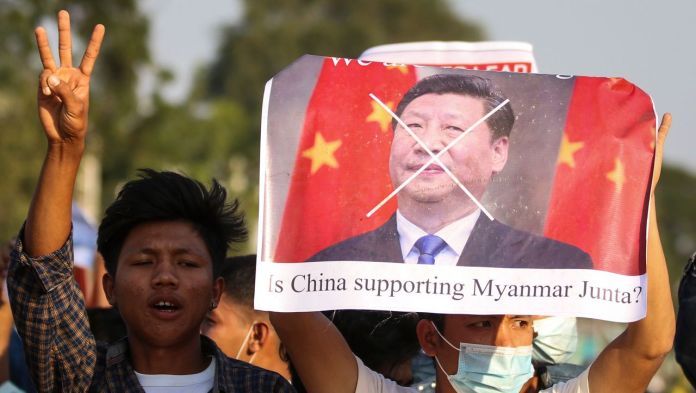 “Fish market” was written on the banner that protesters hung in front of the Chinese embassy in Yangon on Wednesday. This contained clever irony and at the same time a bitter accusation: How the pandemic from the Huanan fish market in Wuhan spread across China – as the allegation can be read – so the Chinese representation in Myanmar is a nucleus of military rule.
In the days before, planes from Kunming, China, had landed in Yangon, even though Myanmar airspace was actually closed. This can be seen on websites that record flight movements. China said it was a regular transport flight that carried fish and seafood on board.

Another theory is circulating in the protest movement: According to it, Chinese technicians were brought into the country on the planes to help the military build a “Great Firewall” based on the Chinese model and to cut off Myanmar from the free Internet.

Almost three weeks after the coup in the Southeast Asian country, the population is increasingly suspicious of its large neighbor in the north. In the opaque information situation, rumors are growing louder that Beijing has a hand in it and supports the coup plotters around Army Chief Min Aung Hlaing. Protest posters show him as the puppet of China’s head of state and party leader Xi Jinping, and online activists call for a boycott of Chinese products and even attacks on a Chinese gas pipeline.

“I don’t trust China at all”

“I don’t trust China at all,” says the young MP Sithu Maung, who would have taken office on February 1 if the coup hadn’t come up. “China has never been a good friend of democracy in Myanmar.”

The  situation is not clear. Even if China’s state news agency “Xinhua” initially glossed over the coup as a “cabinet reshuffle,” the leadership has so far been officially waiting to be cautious. China has rejected the allegation that it was informed in advance of the military strike. In the UN Security Council, the People’s Republic supported a resolution expressing “deep concern” about the situation and calling for the release of the de facto Prime Minister Aung San Suu Kyi. In the past, Beijing had often shielded Myanmar from criticism in the body.

It would be premature to assume that the Chinese leadership would generally prefer Myanmar’s generals to a democratic government under Suu Kyi. Beijing maintained an adequate relationship with her: China’s Foreign Minister Wang Yi visited State Councilor Suu Kyi in mid-January and promised 300,000 doses of a Chinese vaccine before he met Army Chief Min Aung Hlaing. During his last state visit to Myanmar in early 2020, Xi and Suu Kyi agreed on 33 projects as part of the Chinese Silk Road Initiative.

In contrast, during the military dictatorship of decades past, Myanmar’s generals and China viewed each other as difficult neighbors. Deeply nationalistic, the military are wary of Myanmar’s independence. Not only did they dislike the fact that international isolation had forced their regime into the arms of China, but also that Beijing supported ethnic rebels in the border regions.

The  generals also initiated the opening of the country in 2010 because they wanted to gain more freedom of movement in foreign policy. As one of his first acts after the resignation of the junta in 2011, the then President

The in Sein, an ex-general, stopped a Chinese dam project in northern Myanmar.

Basically, China doesn’t care who rules a country as long as there is stability and business continues. “No matter what kind of government is in power in Myanmar, China will work with it,” says parliamentarian Sithu Maung. At the moment, however, there does not seem to be any final certainty in Beijing as to how to position oneself. This is indicated, among other things, by the fact that the debate about the coup on the Chinese Internet was largely uncensored two weeks later. Apparently Beijing has not yet decided which narrative should prevail.
Recommended editorial content
At this point you will find external content from Twitter that complements the article. You can display it and hide it again with one click.

Many Myanmar activists are nevertheless certain that China will at least help the generals to put a firewall around the Myanmar Internet. “I think it is possible, in fact most likely,” says Sithu Maung. This week, the Internet was switched off for five nights in a row, and the technical prerequisites would be created in each of the eight hours, according to the suspicion. In addition, many are concerned that people who send an SMS to a service number of the state provider MPT have recently received a response in Chinese characters. A telltale bug?
Recommended editorial content
At this point you will find external content from Twitter that complements the article. You can display it and hide it again with one click.

Alarmed Myanmares also claim to have recognized Chinese troops in action. Photos on social media show soldiers with supposedly Far Eastern trains and fair skin, in a video they are supposedly speaking Mandarin to each other. In fact, nothing can be heard in the video recorded from a distance that could be clearly identified as Mandarin. And observers have found that the soldiers in question are wearing badges of the Myanmar army.
Recommended editorial content
At this point you will find external content from Twitter that complements the article. You can display it and hide it again with one click.

The  suspicion that Beijing is interfering in Myanmar is not only explosive with regard to international relations. Myanmar is a multiethnic society with officially 135 different ethnic groups. During the colonial period, millions and millions of people immigrated from the Indian subcontinent, later also numerous Chinese. Widespread nativism has repeatedly attacked them.

Anti-Chinese riots broke out in Yangon in 1967, killing at least 31 people.

The  People’s Republic of Mao Zedong had previously called on ethnic Chinese in Myanmar to support the Cultural Revolution.

The  anti-China sentiment that is now rampant in the protest movement is once again putting Myanmar’s Chinese community in a delicate position.

The ir share of the population is particularly high in the second largest city, Mandalay. Thousands of people gathered to protest in front of the People’s Republic consulate there this week.

Many people of Chinese origin have also taken to the streets there – and have made it clear who their loyalty belongs to. “Chinese from Mandalay, citizens of Myanmar” read a banner. Others held up posters that read “Free our leaders.” Next to the slogan was a picture of Suu Kyi.

San Antonio ends NBA away streak with victory at Oklahoma

A piece of a larger puzzle – Causa Casino

Nintendo buys Next Level Games, the developers of Luigi’s Mansion 3 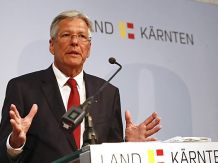 Kaiser calls for suspension of corona punishments for couples – coronavirus...