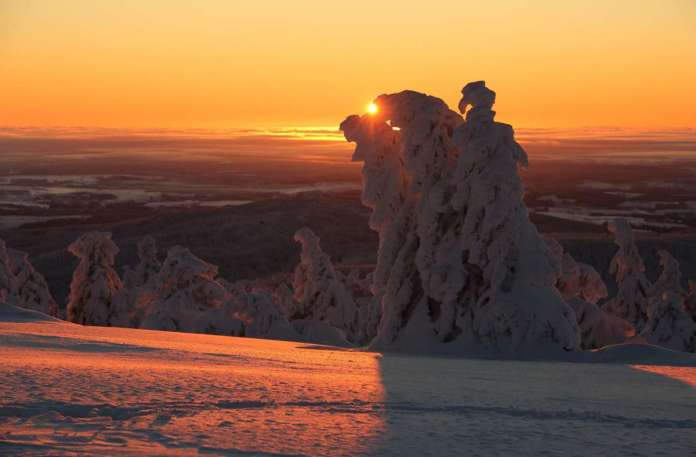 Icy Brocken spruce trees stand in the light of the rising sun on the Brocken in Saxony-Anhalt on Saturday morning. Photo: dpa / Matthias Bein
At the weekend, the winter weather presents itself from its beautiful side in many places. Despite icy temperatures, the sunshine attracts people outdoors – not always without dangers.

Berlin / Offenbach – Nice, but cold: After turbulent winter days with violent storms, people in many parts of Germany can now enjoy the weather again. “Before the cold air gets increasingly to the neck in the coming week, we are facing another cold but wonderfully sunny winter weekend,” said meteorologist Adrian Leyser from the German Weather Service (DWD) on Saturday.

The  people in Germany have the worst frost behind them for the time being: “

The  bottom of the extraordinary cold spell in Germany seems to have passed,” says Leyser. High “Helida” ensures plenty of sunshine and blue skies – at least where local fog fields dissolve. According to the DWD, the cutting easterly wind, strong to stormy in gusts, in the southwest is also slowly decreasing. This makes obstruction from snowdrifts less likely.

Meanwhile, a new trend has established itself during lockdown and winter weather: ice bathing. Whether on the North and Baltic Seas, on Lake Starnberg or on the Isar in Munich – in many places you suddenly see people hooting in the cold water, with bobble hats, completely naked or in bikini. Celebrities like model Eva Padberg (41) or ex- “Bild” editor-in-chief Kai Diekmann (56) show how it is done. In some places, the associations of Kaltwasser-Freunde are also enjoying significant numbers.

However, these days in Berlin it became clear that caution is required, especially when bathing in icy waters. A man died there while bathing in a pond. “Bathing in the ice is life-threatening,” warned the fire brigade.

But even more harmless activities are currently occupying the emergency rooms: “Because of the winter weather, people of all ages fall and are taken to hospitals with injuries of all kinds,” says accident surgeon Felix Walcher from the Magdeburg University Hospital. Accidents occur every year with snow and ice, which the clinics would expect.

In Berlin, the number of cold help places for the homeless was further increased. According to the Senate Department for Social Affairs, there are currently more than 1,500 places available – according to the information, more than ever before. If necessary, it is possible to put other facilities into operation, said a spokesman on Saturday on request. “We are observing the situation and seeing how it develops.”

In the coming days it will remain frosty in many places. Temperatures above freezing point are most likely to be expected along the Rhine and its tributaries, otherwise the maximum values ​​on Sunday are between minus five and zero degrees. From Monday on, low rivers ensure inconsistent weather, but also significantly milder Atlantic air. “A severe weather situation with considerable restrictions in road and rail traffic” is possible. Maximum values ​​are between minus four and plus four degrees up to the middle of the week, in the west and south-west even maximum temperatures of eight degrees can be reached.

Who knows this man who was found in Wilmersdorf?

A clear signal against Merz: Laschet is ahead of the CDU...