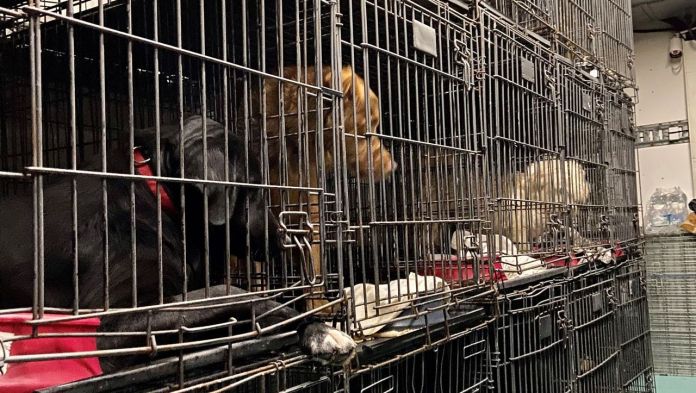 In Cologne, the authorities have stopped an illegal animal transporter from Spain and Portugal. “In the closed loading area of ​​almost ten square meters, 52 dogs and six cats were kept on the sides in around 30 cages and several boxes,” said the city.
As a result, a witness had drawn the authorities’ attention to the unannounced transport on Saturday afternoon. He stopped on a street in the Bocklemünd Mengenich district, where more than 50 people had gathered, some without a minimum distance and occasionally without a mask.

Puppies and cats in bad shape

The  veterinarians who were called would have checked every dog ​​for vaccinations, correct chip numbers and manipulations or abnormalities that were mandatory for importation into Germany.

It was said that it was very warm inside the vehicle and smelled strongly of urine.

The  city said the animals were scared. Not all of them got enough water and food. In addition, her health was not checked during the transport.

Three puppies and four cats in poor condition were therefore brought to the animal shelter, the others given to animal welfare associations. Those responsible for the transporter with Spanish registration are now to be checked further, investigations are being carried out because of the “questionable conditions surrounding the transport”.

Butter prices are only falling slightly on the refrigerated shelves

Lars Eidinger in the SN interview: “It’s about everyone, it’s about...

Weapons from Austria for right-wing extremist militia in Germany?

Credit Suisse pensions are not enough in MBIA procedures | ...