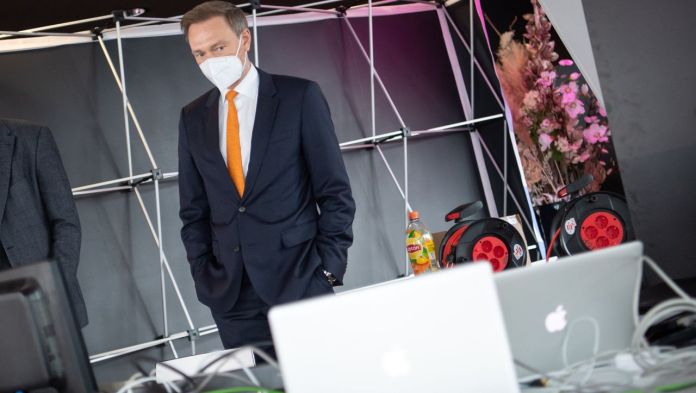 In many places in Germany the pictures were alike on the weekend. After the days with ice and cold, the temperatures were often almost spring-like. Whether in Berlin, Munich, Frankfurt, Cologne, Düsseldorf, Hamburg, Stuttgart, Leipzig or Dresden, especially in large cities and metropolitan areas, people were pushed into the parks or the water. Often they were crowded together.
At least in such places, little was seen of a persistent pandemic situation with distance rules. In addition to these images, there is the fact that the incidence values ​​- i.e. the number of new corona infections within a seven-day week measured per 100,000 inhabitants – are currently hardly falling in some regions of Germany and are even rising again in some places.

The  question arises whether the agreement recently passed by the federal and state governments to allow easing – initially for the retail trade, museums and businesses with body-friendly services – can only be maintained if the incidence value has remained below 35.

The  number 35 is controversial; previously, falling below the incidence of 50 had repeatedly been mentioned as a goal in the discussion – but before the more aggressive corona mutants spread faster on mainland Europe. This debate about the extent to which it is possible to reach the incidence value below 35 could possibly pick up speed again. It has already begun in the grand coalition.

The  legal policy spokesman for the SPD parliamentary group, Johannes Fechner, recently told SPIEGEL that almost all EU countries have additional criteria. “We need them too. It also needs to be much clearer what can be restricted and when. ”

The  SPD legal politicians want to change the next version of the Infection Protection Act so that the number of free intensive care beds is also taken into account, as well as the ability of the health authorities to prove chains of infection. However, it remains to be seen whether they will also receive the approval of the SPD health politicians and the Union parties in the grand coalition.

On the side of the opposition, the FDP has been doubting for days whether the incidence regulation recently sought by the Chancellery and the federal states can still be kept in shape.

The  mere orientation on the numbers 35 or 50 does not do justice to the pandemic.”

The  more tests are available and the more people at high risk of a serious illness are vaccinated the less these numbers said anything on their own.

»In order to make measures proportionate, other measured variables must also be considered. For example, it is important to know which age groups are infected, how busy the intensive care units are and how the chains of infection can actually be tracked, ”said the FDP politician, whose party recently introduced a step-by-step plan in the Bundestag for a relaxation – among other things Consideration of the corresponding incidence values ​​and other criteria. “

The  grid of incidences of 35 and 50 has long been too rough for that,” Lindner is convinced.

The  Governing Mayor of Berlin, Michael Müller (SPD), has meanwhile had a plan drawn up that provides for nationwide easing from certain incidence values ​​and also takes other factors into account.

The  value of 35 continues to play a central role. Müller, currently chairman of the conference of prime ministers, wants the paper to be discussed at the upcoming federal-state summit. According to the Berlin newspaper »Tagespiegel«, the three-stage plan looks like this:

In addition to the incidence, »dynamic factors« such as the number of reproductions, intensive care bed capacity and, »in the future«, the vaccination rate should also be taken into account. He told the “Stuttgarter Zeitung” that the perspective should not be “a one-way street”. “If necessary, we will have to adopt restrictions again if the numbers rise sharply again,” said Müller.

Will a region of France be reclassified?

Chancellor Angela Merkel (CDU) and the Prime Ministers recently agreed to allow the latest measures to apply until March 7th. In view of the increasing number of infections in parts of southern Germany, border controls had already been introduced by the Federal Ministry of the Interior at the borders with the Czech Republic and the Austrian Tyrol.

On Monday, according to SPIEGEL in Berlin coalition circles, a higher warning level for the French Moselle department, which borders the Saarland, should be discussed in the so-called small corona cabinet. So far, France has been considered a “risk area”, now the region could be classified as a “high incidence area” or even as a “virus variant area”, as the newspapers of the Funke media group previously reported.

The  “Small Corona Cabinet” has met every Monday since the beginning of the pandemic under the chairmanship of the Chancellor. Ministers for Defense, Finance, Home Affairs, Foreign Affairs, Health and the Head of the Federal Chancellery take part in it.

According to this, Federal Interior Minister Horst Seehofer (CSU) also wants to extend the controls at the borders to the Czech Republic and Tyrol until March 3.

The y expire on Wednesday night. On March 3, the next federal-state switch on the situation of the pandemic will also take place.

At the weekend, there were also increased signs that primary school teachers and day-care center employees could slip forward in the vaccination sequence. Several state representatives, health minister Jens Spahn and education minister Anja Karliczek (both CDU) are in favor of this. On this Monday afternoon the health ministers of the states could make a corresponding fundamental decision at a switching conference, announced Baden-Württemberg’s head of department Manne Lucha (Greens).

The  step of changing the Corona Vaccination Ordinance by the Federal Ministry of Health would have to be implemented in practice.

The  number of new infections in Germany increased both on Saturday and Sunday compared to the previous weekend.

The  so-called seven-day incidence also increased to 60.2 nationwide compared to 57.8 the previous day. 145 deaths were reported within 24 hours. Last Sunday there were 218. Experts attribute the increase primarily to the spread of significantly more contagious virus variants.

The  third wave starts now, ”he tweeted over the weekend.

The  only question is “how fast and how strong”. Meeting it also means changing the vaccination strategy. “First vaccination before, vaccinate Astra faster for everyone under 65 years for all risk groups,” was his suggestion.

With material from dpa

Cheyenne Ochsenknecht: She shows her baby bump for the first time! Nuremberg Mayor King: ban on firecrackers for Germany called for

Does he have Corona ?: Robbie Williams isolates himself in a...