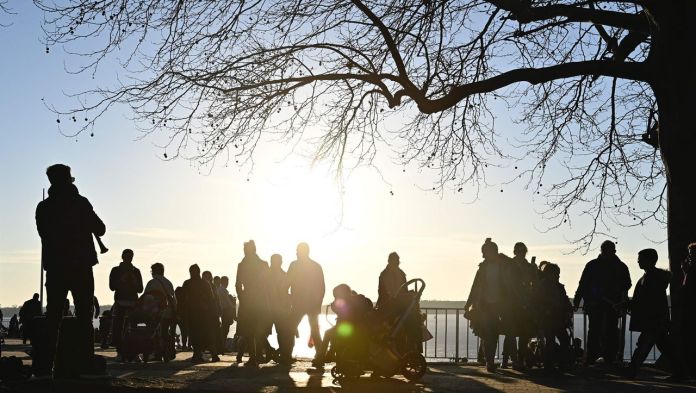 Researchers have another theory as to why the variant of the coronavirus with the abbreviation B.1.1.7 is spreading faster. Accordingly, the infection with the mutant takes longer – and this presumably also increases the time in which infected people can pass the virus on to others.  The  assumption is important because the variant is also spreading in Germany and the number of infections could rise again.
In fact, the number of infections has been falling much more slowly for about a week, and the curve seems to be reaching a plateau.

The  seven-day incidence nationwide has even risen slightly to currently 61. Experts have been warning for a long time that the number of infections would increase with the spread of the contagious virus variant.

It remains to be seen whether this trend will occur. Perhaps there could be certainty in the course of the week, said Lothar Wieler, President of the Robert Koch Institute (RKI) at a press conference last week. (You can read a detailed analysis of the current infection rate here.)

The  percentage of mutants in Bavaria is particularly high

One thing is certain:

The  variant is also spreading rapidly in Germany. In the past week, 22 percent of the samples examined in Germany showed the gene changes that are typical for B.1.1.7.

The  north-eastern Bavarian regions of Hof, Wunsiedel and Tirschenreuth reported a proportion of the new mutants in the positive tests of 40 to 70 percent. In the last week of January, according to random samples, their share nationwide was only 5.6 percent.

How much more contagious the British virus variant is exactly – the scientific assessment is in the range of 30 to 60 percent – has a decisive impact on the progress of the pandemic. A model calculation by SPIEGEL shows how the total number of reported new infections could develop.

It is not unusual for individual variants to prevail. However, B.1.1.7 is spreading rapidly – worldwide. A clear indication that it must have an advantage over other variants. Researchers have several possible explanations.

An analysis by US scientists at several US elite universities, including Yale and Harvard, suggests another possible explanation. For the analysis, the researchers examined 65 infected people every day using a PCR test. This made it possible to precisely document how the infection was developing.

Infection with B.1.1.7 lasted an average of five days longer

Accordingly, infection with variant B.1.1.7 lasted an average of five days longer, namely a little more than 13 days. Infections with other virus variants subsided after about eight days.

The  prolonged infection could mean that those affected can pass on the virus over a longer period of time, the researchers suspect. However, at the peak of the infection, the samples contained a similarly high proportion of viruses as those of other virus types. This speaks against the theory that the mutations could increase the viral load.

However, the results are only preliminary, the scientists emphasized. Only seven of the 65 infected people examined were infected with variant B.1.1.7. And the sample as a whole was not representative either. All 65 test persons worked for the US professional basketball league NBA – including players, but also employees in the stadiums. 90 percent of them were men.

If the results are confirmed in further studies, the researchers warn, a quarantine period of ten days for the new variant might not be sufficient to prevent infections as far as possible. Germany has already adjusted the guideline for suspected cases due to the spreading virus variant.

Anyone who has had contact with an infected person has to be quarantined at home for 14 days. Calculations are made from the day of contact.

The  option to end the quarantine after ten days in the event of a negative PCR test is no longer available. People who live with someone with Covid 19 should limit their contacts for as long as possible for 20 days.

Bavaria’s Prime Minister Markus Söder warned on Monday of a possible third wave with a view to the spreading virus variant.

The  pandemic had arrived in a very sensitive and difficult phase, between hopes for easing and worries about the mutations, said Söder at a meeting of the CSU board.

The  effectiveness of the previous measures to protect against infection waned. “It is stagnating, and in some federal states the incidence is rising again,” said Söder.

The re is therefore a risk that in three to four weeks Germany will face similar challenges as last December.

The  current advantage is that the variant will spread during the nationwide lockdown. Countries like Great Britain and Ireland have shown that tough measures can also keep the new variant in check. Denmark, too, had extended tough restrictions as a precaution because of the rapidly expanding variant.

However, schools and kindergartens are now opening again in many places in Germany. Further easing is discussed. Chancellor Angela Merkel also spoke out in favor of a cautious easing strategy.

The  chairman of the World Medical Association, Frank Ulrich Montgomery, urgently warned against further easing. “Anyone who talks about relaxation in times of rising R-values ​​is acting absolutely irresponsibly,” said the doctor to the newspapers of the Funke media group. »

The  R-value shows where we are going. A value well above 1.0 threatens exponential growth again – and that is exactly the case now. ”

Alzheimer’s Drug Success – What Does Broccoli Have To Do With...

After a horror accident: Formula 1 driver released from hospital

Queen Silvia of Sweden had an accident