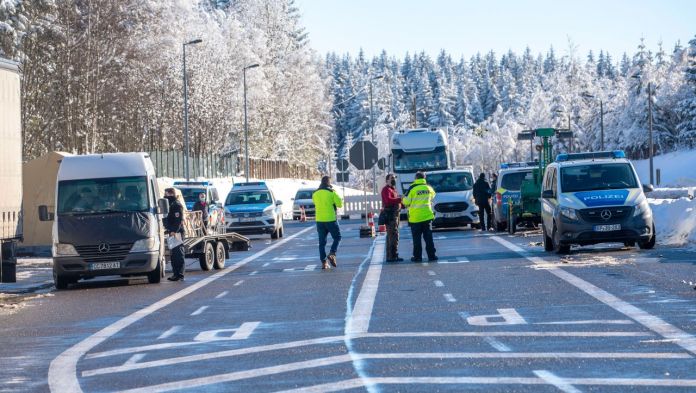 On Saturday morning, Thomas Schwarz and his dispatchers tried to keep the ongoing operations from the worst chaos with a quick action.

The y called all of their 30 or so truck drivers in the Czech Republic who were supposed to be driving to Germany for the Schwarz forwarding company in the coming days – and immediately ordered them to take part in the corona test. At the same time, they filled out digital entry registration forms for each driver: as the federal government also requires for goods transport from the Czech Republic.

The  forwarding company, which specializes in transports to the Czech Republic, has thus fulfilled all of the new regulations.

And yet many Schwarz trucks have to wait for hours at the border with Germany on Monday. On Czech motorways, in the middle of miles of traffic jams. “

The  best preparation is of little use if you stand behind others who do not have the right papers,” says Thomas Schwarz, 54, who is the fourth generation to run the family business from Herbrechtingen in Baden-Württemberg. “Our whole transport network is mixed up. Nothing works with meeting deadlines. ”

It is the first working day on which the rigid entry rules at the borders with the Czech Republic and Tyrol apply.

The  federal government decided to do so: with the aim of containing even more contagious variants of the coronavirus. Single-handedly. Without adequately involving the neighboring states. Not to mention the EU Commission, which is trying to ensure that freight traffic is as free as possible – and has been disgraced by Federal Interior Minister Horst Seehofer (CSU).

The  queues in front of some checkpoints are reminiscent of the chaos of last spring: when Germany closed rows of external borders in the first corona wave, the supply of goods was hindered for days, supply chains broke, factories came to a standstill.

It’s not that far this time. But economists warn of serious damage to the economy if traffic jams persist.

The  Association of the Automotive Industry warns that production in some plants could come to a standstill. And the freight forwarders are appalled.

“We will not allow Tyrol to become Europe’s parking lot”

“Our industry is upset,” says Frank Huster, General Manager of the Federal Association of Freight Forwarding and Logistics (DSLV) to SPIEGEL. You understand that politics must react to the mutations. But: “

The se measures are excessive. Our drivers hardly have any outside contact on their tours. ”

In addition, the stricter border controls were decided “hastily”, says Huster. “Our companies could hardly prepare for it.” Many had sent their trucks on tours days ago and were then surprised by the new regulations.

The  question now is when and how the drivers will come back – and whether they can work in the event of negative test results.

According to Huster, the regulations are inconsistent. If the truck drivers are German citizens, they usually have to quarantine for five to ten days after entering Germany, said the DSLV managing director. Foreign truckers, on the other hand, are also subject to the obligation to isolate themselves, but they often lack suitable accommodation.

The  new controls not only affect trucks from Tyrol and the Czech Republic – but also those that are traveling through, for example with goods from Italy. Because of the new German rules, Tyrol wants to reduce truck traffic over the Brenner to prevent extreme backwater. “We will not allow Tyrol to become Europe’s parking lot,” says Tyrolean Governor Günther Platter. This could hit German companies that are dependent on deliveries from Italy.
Weeks ago, top economists had warned urgently against closing intra-European borders for freight traffic. Now they fear deep damage to the economy if the obstacles persist and supply chains are destroyed.

The  warning from the automotive industry about plant closures due to entry restrictions shows very clearly how vulnerable the supply chains are at the moment,” said Torsten Schmidt, economic director of the Essen economic research institute RWI, to SPIEGEL. »Should this step actually become necessary, the expected decline in GDP in the first quarter would be much stronger than previously assumed.

The  lockdown would then probably not last very long economically. ”

“If the problems persist at the borders to Tyrol and the Czech Republic, there may again be disruptions in the supply chains and thus a burden on German industrial production,” warns Sebastian Dullien, Scientific Director of the Institute for Macroeconomics and Business Cycle Research (IMK). “That would put a strain on economic growth in the first quarter of 2021.”

At VW, nervousness is increasing

The  automotive industry is particularly dependent on intact supply chains. It has advanced so-called just-in-time production, i.e. the precise delivery of components in terms of time and quantity, depending on current requirements. For some time now, she has also known the downtime when important parts are suddenly missing from the line – and has therefore created appropriate buffers in the warehouses.

Nevertheless, the nervousness is already growing at Volkswagen: especially with regard to the important electrical plant in Zwickau.

The  supply chain has not yet been broken, they say. But watch the situation closely.

The  car manufacturers in southern Germany are a little more relaxed. “

The  problems with interrupted supply chains have already come to light in the past, so we are now prepared for them,” says Jörg Howe, Head of Communications at Daimler. Currently, the effects of the border closings are not yet felt.

In response to a request from SPIEGEL, BMW announced that the first deliveries had arrived without any major delays. One hopes “for a pragmatic and efficient approach by the authorities in the controls at the border crossings in order to maintain supplies.”

A Porsche spokesman describes the situation in a similar way: “At the moment, supply problems are not an issue with us.”

The  situation is different if the border closings lasted longer, he admitted when asked. However, he is not assuming such a worst-case scenario.

However, the borders must not be closed for very long: “

The se supply chains are already under stress today,” said Andrea Marongiu, managing director of the Baden-Württemberg forwarding and logistics association, the “SWR”. “

Germany imports goods worth 55 billion euros per year from the neighboring country;

The  automotive industry has around ten percent of this, says Marongiu: “When some automobile manufacturers say they are not affected, then I am very surprised that the entire chain has been illuminated so quickly.”

Clemens Fuest, President of the Munich Ifo Institute, calls for uniform standards for infection protection in order to avoid border closings. “From my point of view, we finally have to use intelligent mobility concepts to ensure that value chains function without being contagion chains. To do this, significantly more has to be tested, partly through rapid tests, ”Fuest told SPIEGEL.

However, there is currently nothing to be seen at the border crossings of cross-border standards or even intelligent mobility concepts.

The  federal government had promised improvement after the mess during the first wave.

“We have to think about transport and logistics in a European and international way, even in times of crisis,” wrote the German EU Council Presidency at the end of September in its key issues paper for a European pandemic and crisis emergency plan in freight transport. “A crisis situation like the Covid-19 pandemic must not interrupt system-relevant European freight traffic flows and logistics chains (even for a short time) suddenly and unprepared.”

But that is exactly what is happening again. And Thomas Schwarz’s trucks are stuck in traffic again. “I’ve never seen such delays as in the past twelve months,” says the freight forwarder. “It annoys us that there is no European solution. Every state does its own thing. ”

Where does the racism against Asians in Germany come from? ...

Update on the plans for “WrestleMania 37”: Which old stars do...

Jersey leaked: are these the new Rapid-Leiberl? – Soccer