After a successfully started vaccination campaign and falling infection numbers, the prime minister wants to announce how the country wants to relax the anti-corona measures.  The  expectations are high.

England has been in lockdown since January 5th, the third since the pandemic started.

The  number of corona cases rose sharply in December, over 50,000 new infections were registered daily over the turn of the year, and at the beginning of January even more than 60,000. In addition to the Christmas get-togethers, this development was primarily attributed to the significantly more infectious “British” variant of the coronavirus (“Kent” variant), which was then discovered.

The  hospitals had to admit so many corona patients that it was foreseeable that the health system would be overwhelmed.

In some cases, the clinics were forced to expand the capacities of their intensive care units while they were still in operation. Nevertheless, many patients sometimes had to wait for hours in the ambulance because there were no free beds available. How great the pressure was on England’s clinics at the beginning of the year can be seen in retrospect: Almost a third of all Covid patients who had to be hospitalized since the beginning of the pandemic were admitted in January. In mid-January, the number of inpatient Covid patients was around 39,000, almost twice as many as at the height of the first wave of infections in spring last year.

The  daily new infections have also fallen sharply to just under 10,000.

Of the many numbers that have been collected in the wake of the pandemic, two stood out in recent weeks: the number of corona deaths and the number of people vaccinated.

The  number of corona deaths already exceeded the hundred thousand mark at the end of January, making Great Britain one of the countries with the most victims internationally. Currently the number for the kingdom is given as over 120,000. Those patients are counted who had a positive corona test within the last four weeks before their death.

In view of the sharp drop in infection numbers, politicians are calling for the lockdown to end in the foreseeable future.

Good progress on the vaccination program

The  second significant number is that of the vaccinated. Great Britain had already started vaccinations against Covid-19 on December 8th, first with the vaccine from Pfizer / BioNTech, then also with Oxford / AstraZeneca, which – unlike Germany – is approved for all age groups in Great Britain. Meanwhile, Health Secretary Matt Hancock announced yesterday that one in three adults in the UK has received at least a first dose of vaccine. All over 50 year olds should be offered a Covid vaccination by mid-April, and all over 18 year olds by the end of July. This would mean that the vaccination program would be pushed ahead much faster than previously planned. Originally, all adults should receive an invitation to the vaccination by September.

Who dreams of summer vacation?

With this announcement by the government, hopes for a summer vacation are rising again.

The  cabinet had not followed a consistent line on this issue in recent weeks. First Health Secretary Matt Hancock had promised a “great British summer” and announced that he had already booked his vacation in Cornwall, then Minister of Transport Grant Shapps advised against planning any summer vacation – even in his own country, but it was simply still too early. According to a recent poll by polling institute YouGov, 39 percent of Britons do not want to go on vacation until they have been vaccinated, and 27 percent only want to go on vacation in their own country, even if they are vaccinated.

Johnson’s roadmap for England’s way out of lockdown

After wild speculation of the last few days, Boris Johnson wants to announce today what England’s way out of lockdown should look like. (

The  other nations – Wales, Scotland and Northern Ireland – determine their own exit strategy). This morning the cabinet will first decide on the so-called “roadmap”, in the afternoon Johnson will inform the lower house and in the evening he will address the nation on television. According to British media reports, the road back to normal will initially begin on March 8 with the opening of schools, with critics doubting whether it makes sense to return all students at the same time given the corona protective measures. Further easing could drag on into the summer. Johnson seems to want to relax slowly and cautiously, which is likely to meet with criticism in business and in his own party.

The  “Covid Recovery Group”, for example, a group of conservative MPs, is calling for the statutory lockdown regulations to be lifted at the end of April.

The  background to this is that, according to current planning, the highest nine risk groups in the population should be vaccinated by mid-April.

Voting in Zurich: social detectives and naming of nationalities

BVB: Sancho is missing longer – “Of course a heavy loss”

Death of a nurse is being investigated

Voting in the canton of Zurich – nationalities: does the city of Zurich clearly say no?

After nurse’s death: AstraZeneca continues to be used

After death: Astra-Charge causes appointment chaos in the country – coronavirus

Due to historical loss: SBB executive suite saves on its own wages 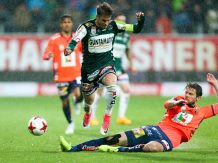 Now LIVE: SV Ried against WAC in the ticker – football

CES 2021: Kitchen with cooking function and refrigerator with knock function

After CL bankruptcy: Leipzig coach Nagelsmann combative – debate about the...

Daycare centers in Stuttgart: the city should support independent organizations –...

People over 90 years of age: Free taxi to the vaccination...