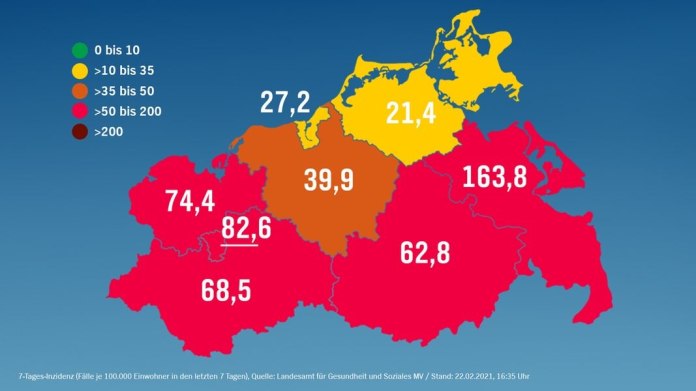 The  number of registered new corona infections has increased by 73 cases in Mecklenburg-Western Pomerania since Sunday (as of Monday 4:35 p.m.). Overall, the State Office for Health and Social Affairs (LAGuS) reported 23,508 infections in the country since March 2020. According to an estimate by the Robert Koch Institute (RKI), 20,628 (+103) of the people who tested positive in Mecklenburg-Western Pomerania have recovered from Covid 19 disease.

The  coronavirus pandemic has changed the lives of people in Mecklenburg-Western Pomerania.

The  NDR accompanied people during this time. more

Nationwide, the incidence value fell from 67.5 to 67.2 infections per 100,000 inhabitants within a week compared to the previous day. It is around six points above the national average. A week ago it was 65.3. In the Vorpommern-Greifswald district, the seven-day incidence value is 163.8. Schwerin has an incidence value of 82.6.

The  LAGuS reports a value of 68.5 for the Ludwigslust-Parchim district and a value of 74.4 for Northwest Mecklenburg.

The  Mecklenburg Lake District reports a value of 62.8. In the Rostock district the authorities report an incidence of 39.9, in the Hanseatic City of Rostock it is 27.2 and in Western Pomerania-Rügen it is 21.4.

Currently 293 people with Covid-19 in hospital

The  register shows 492 occupied and 133 vacant intensive care beds for Mecklenburg-Western Pomerania (as of Monday 4:19 p.m.).

Since the end of January, LAGuS has also been publishing figures on the situation in old people’s homes, schools and daycare centers. Accordingly, as of Monday there are active infection events in 27 (-1) geriatric care facilities. 601 (-4) residents and 291 (-1) employees are affected.

The re are also active infection events at 11 (-4) daycare centers and after-school care centers. 11 children and 6 educators and employees are affected.

The re is currently no active infection process in schools in the country.

The  LAGuS’s daily corona statistics only include people who have their primary residence in Mecklenburg-Western Pomerania.

The  LAGuS also publishes regular reports on infections among guests.

The se are all those people who have been found to be infected in Mecklenburg-Western Pomerania, but who do not have a primary residence in the state.

The  district administrator of Vorpommern-Rügen was present to have received an early corona vaccination. more

The  government of Mecklenburg-Western Pomerania is increasingly putting money into hand to explain its policy. more

At the Klinikum in Neubrandenburg, for example, the number of people infected with corona has fallen by more than half. more

Huge amounts of data in the fight against COVID-19 & Co.

What is meant by a “Covid arm”? Corona question of the day

Bodies found: number of victims increased to four after landslide in...

Strengthening the immune system in a natural way – healing practice

This is how “Doom Eternal” is doing on Nintendo Switch –...