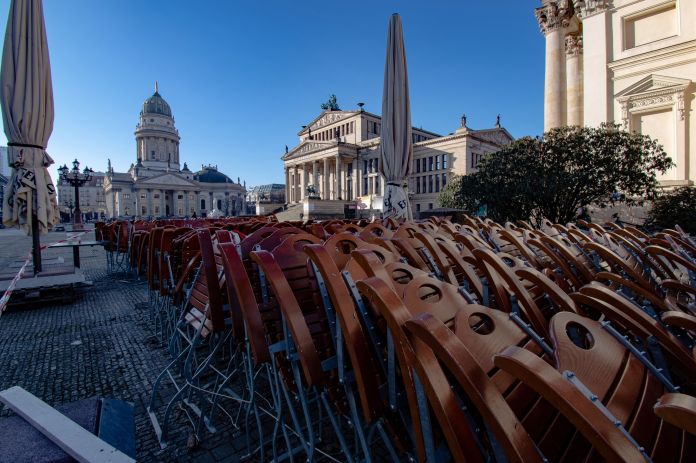 Berlin –  The  Berlin Senate has drawn up a step-by-step plan for step-by-step relaxation when the 7-day incidence falls below 50 new cases per 100,000 inhabitants and week. As reported by the Tagesspiegel, the first easing should start even earlier.

Initially, groups of 10 children under the age of 12 should again be allowed to play outdoor sports together. This should also be possible if the incidence value is over 50.

The  gradual opening of daycare centers and schools should also continue.

If the seven-day incidence falls below 50 and stays below it for seven days, the age limit for outdoor sports groups should be dropped.

The  maximum number of ten people should remain.

Most relaxations come from an incidence value below 35

If the incidence value is below 35, restaurants and cafés can then be opened gradually and for a maximum of four people from two households.

The re is then a curfew for the catering trade. In addition, outdoor events should be made possible as a “first entry”. It is also planned to loosen the ban on contact to a maximum of five people or two households – as well as reopening the solariums.

The  next easing stage should take place when the incidence value reached remains “stable or falling” for 14 days and the reproduction factor does not exceed 0.8. This regulation differs from previous models.

The n theaters, opera and concert halls as well as cinemas with restricted access are also allowed to open. Cultural events can then also take place in the open air for up to 250 people, and in closed rooms for up to 150 people.

The n the openings for bars and clubs take hold

Other markets should then also take place again subject to conditions and with approval, the rules for gastronomy would be relaxed. In addition, tourist overnight stays should be possible again. Bars and pubs are also likely to reopen under certain conditions. If the R-value rises above 0.9, pubs have to close again.

The  same rule applies to catering in hotels and guest houses.

If the seven-day incidence remains stable or declining for another two weeks and the R-value is at or below 0.8, museums are allowed to return to full operation.

The  same applies to theaters, opera houses and cinemas with ventilation systems. Cultural events with 500 outside and 250 guests inside could then take place again.

Even clubs should be allowed to reopen if they submit a hygiene concept with person restrictions. Group sports may then be carried out again and competitions may be permitted.

The  curfew would be lifted and restrictions on people in the catering trade relaxed.

In the last step, if the incidence remained stable or falling for another 14 days, the restrictions would almost completely disappear. Only indoor cultural events would have a maximum of 500 participants and clubs would still need a hygiene concept.

Dynamically, however, the regulations should also be based on other “assessment factors” such as the R-value, intensive care bed capacities and the prospective vaccination rate. It is unclear what exact influence the draft paper will have on the federal-state consultations next week. But since Berlin and Müller are currently chairing the Prime Minister’s Conference, the draft will presumably play an important role.

Assault on US Capitol: These people are behind the US mob

“The Swiss will still show off”

Several fires over the weekend in Berlin

Bluetooth speakers from JBL at a low price