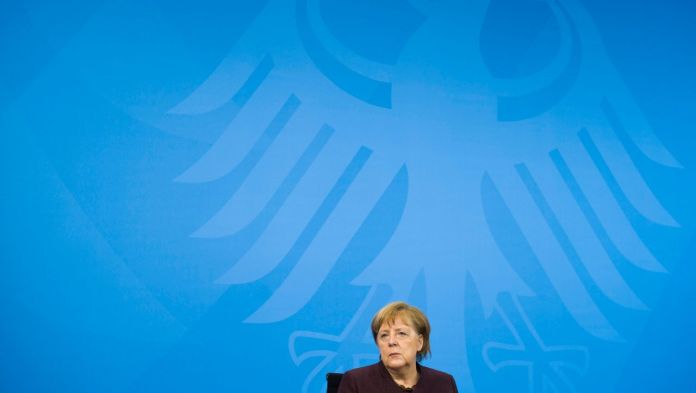 In the end, the debate apparently accelerated so much that there wasn’t even time for a drink of water. “Start immediately,” says Angela Merkel after she has sat down at the desk in the government headquarters and opens a bottle. “I have to have a drink first.”
In the meantime, the matter had dragged itself back like chewing gum, at least that’s what participants in the virtual round with the Chancellor reported.  The  Prime Minister’s Conference (MPK) lasted almost five hours this time, and now, as usual, Merkel will present the results afterwards – on her right the incumbent MPK boss, Berlin’s Governing Mayor Michael Müller, on her left the Vice-Chairman and Bavarian Prime Minister Markus Söder.

On paper – the federal-state resolutions comprise seven pages – the core result looks like this:

Has Merkel prevailed in the struggle to take the right measures in the fight against the corona virus? Or did the country chiefs score points against the Chancellor this time?

The  question is not that easy to answer. If you take Merkel’s mood in and after the MPK as a yardstick, she seems to be feeling pretty good with the results.

The  Chancellor was “tidy”, heard from participants, she seemed downright “relieved” and even joked a little now and then. Maybe because she had imagined the negotiations to be much more difficult?

Some of the prime ministers had made it clear in advance that they wanted to loosen the lockdown, and they also called for opening perspectives. But Merkel wanted to prevent that together with those prime ministers who are pursuing a similarly strict course as her. And she succeeded.

In return, the federal states have been given a free hand in schools and daycare centers. Unlike in the past, Merkel did not even try to agree on a common line in the group. At the press conference, she admits this surprisingly frankly.

The  Chancellor said that the federal states could not theoretically end the lockdown themselves in primary schools and daycare centers from next week. “It is simply not possible that I, as Federal Chancellor, can assert myself as if I had a right of veto.”

The  surprising admission of her powerlessness at this point, as the experienced negotiator Merkel may have suspected, helped in turn with other points. For many allies, however, this deal caused irritation. For example, Baden-Württemberg’s Greens Prime Minister Winfried Kretschmann, like the Chancellor advocate of a strict anti-corona course, said according to participants: “Angela, I’m not happy about your change of course.”

Hamburg’s First Mayor Peter Tschentscher also pleaded for a stricter course. Any discussion about prospects stirs up expectations that are likely to be disappointed, said the Social Democrat, according to participants. That hits everyone back.

Merkel’s change of course at schools and daycare centers means that she now wants to have Health Minister Jens Spahn checked whether teachers and educators can not move up to the second vaccination priority group in return – this was expressly not planned so far.

It is more important for Merkel that no further easing is taken for the time being. Above all, however, it enforced that the limit value for future steps in this direction was not an incidence of 50 new infections per 100,000 inhabitants within a week – but a value of 35.

The  number of new infections has to go down, down, down – that is Merkel’s top priority. Your concern: the British virus mutation.

The  number of infections may currently develop positively, but this trend could explode if the lockdown is ended too early and the much more contagious mutant spreads. “It will gain the upper hand,” says Merkel.

The  old virus will disappear, people will live with a new virus. “And we cannot yet assess this new virus and its behavior,” she says.

Against this background, the group agreed on the following further resolutions:

And then there’s the hairdresser thing.

The y are allowed to reopen from March 1st, subject to strict hygiene requirements: customers must make reservations and wear medical masks.

In the end, Bavaria’s Prime Minister Söder, who has now grown a veritable great man himself, thinks that is very correct.

The  CSU chairman emphasizes that it is no small matter: Allowing people to go to the hairdresser again “also has something to do with dignity.”

Austria extends lockdown by two weeks for the time being