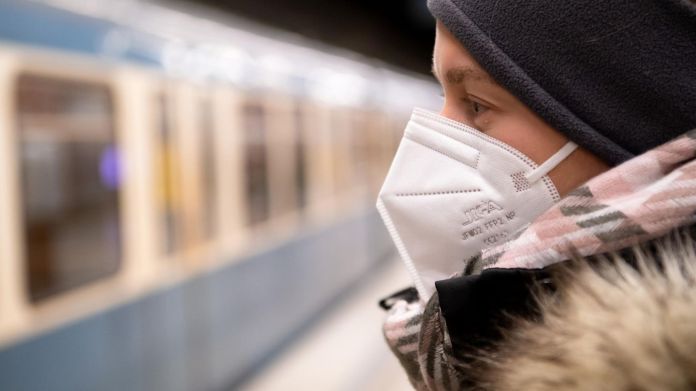 Despite the lockdown, the number of corona infections is stagnating in Germany – and has even increased slightly recently. Is that the dreaded trend reversal? SPD health expert Karl Lauterbach sees Germany “at the beginning of the third wave”.

The  retail trade is closed, contact restrictions apply and restaurants are also closed:

The  lockdown in Germany is ongoing, but the number of infections has stagnated and has recently been rising slightly.

The  Robert Koch Institute (RKI) reported 7,676 new cases on Sunday – 1562 more than a week ago. Within seven days there were 60.2 new infections per 100,000 inhabitants, a slight increase compared to the previous day.

The  R value also climbed to a value of 1.07 on Saturday. Mathematically, 100 infected people infect 107 other people.

The re are increasing signs that the trend of the last few weeks with falling infection numbers has been broken for the time being.

SPD health expert Karl Lauterbach looks with concern at the values ​​of the past few days. “I think it is certain that the numbers indicate that we are at the beginning of the third wave,” said Lauterbach on Saturday in an interview with the “SWR”. That is also the development that has emerged from model calculations.

The  lockdown is strong enough to displace the old wild-type variant, but the new variants, especially the British but also the South African variant, are expanding further and that is not really good to stop with the lockdown we are currently using to have.” Lauterbach is now expecting a steady increase in the number of cases. “

The  third wave is also the beginning of a new pandemic,” he warned. Infected with the B.1.1.7 mutant are not only contagious longer, a lower virus dose is also sufficient for infection.

Some federal states are planning to partially open schools from Monday. Lauterbach sees this critically against the background of the current figures.

The  antigen tests are “not yet available”, they are taking a “risk” with the schools: “We will see outbreaks with the mutation in schools,” said Lauterbach. He appealed to use antigen tests “as soon as possible” in school children too.

RKI figures show how widespread the mutant, first detected in Great Britain, is in Germany.

The  variant was found in the last week of February in 22 percent of the samples examined. At the beginning of February the value was just under six percent.

“It is undisputed that B.1.1.7 will replace a large part of the infection cases,” says Alexander Mellmann, director of the Institute for Hygiene at the University Clinic in Münster. “

The  extent to which this affects the infection process depends on how well the population is aware that the AHA-L rules must be observed.”

Countries like Ireland would show that containing the infections is feasible. “

The  important thing is not to tighten the measures or to introduce more, but to consistently follow the old ones,” said Mellmann.

Roman Wölfel from the Bundeswehr Institute for Microbiology in Munich also sees the behavior of the population as a decisive factor: “It is likely that countries like the United Kingdom or Denmark are currently not seeing an increase in the daily number of cases, although the variant already accounts for a large proportion of the infections there on the behavior of the local population.

The  people there will be aware of the situation and will increasingly adhere to the extensive containment measures. ”

The  rules would also work with the mutants, but they would have to be adhered to more strictly, emphasized Lauterbach in an interview with the “SWR”. He called for FFP2 masks to be worn whenever possible whenever a mask was needed.

The  antigen tests should now also be widely used. He also sees a further lever in the vaccine from AstraZeneca: It is “unacceptable” that the wrongly discredited vaccine is now lying in the vaccination centers. “From my point of view, it would make sense to use this vaccine for all three priority groups among the under 65-year-olds,” said Lauterbach.

The  only question is how fast it comes and how strong it is.

Donald Trump: Expert explains why so many people voted for him...

Missing Rebecca: The Mysterious Story of the Purple Fleece Blanket |...

Juventus on the up ahead of “Derby d’Italia” at Inter

Coronavirus: how dangerous is the UK mutation?