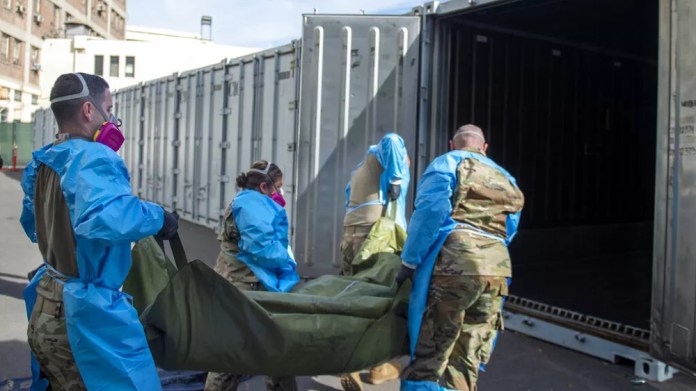 Almost 500,000 people died of Covid-19 in the USA – that is more deaths than US deaths in all wars combined, that is, more than in the First and Second World Wars and the Vietnam War.

At the same time, there is hope – the New York Times writes – because the number of new infections in the United States has fallen sharply in recent days, and the number of daily deaths has also recently decreased.

The  New York Times printed a “Wall of Mourning” on its front page.

The  virologist Anthony Fauci, who advises US President Joe Biden, said in view of the almost 500,000 deaths: “This is terrible. We have not seen anything like this for 100 years, since the pandemic of 1918.”

In Australia, Prime Minister Scott Morrison has set a good example: he was one of the first in the country to be vaccinated against Covid-19 and asked the public to participate in the vaccination program.

Scott Morrison said, “It is safe, it is important to join us on this Australian journey that leads us out of the Covid-19 pandemic.”

Vaccinations in Australia started this week. Around 150 million vaccine doses from several manufacturers have been ordered for the approximately 25 million Australians.

The  beginning is made here by health workers, residents and employees of nursing homes as well as employees of quarantine stations.

Before the vaccination started, resistance to national vaccination campaigns had formed in Australia. Hundreds of demonstrators gathered for marches and rallies in several large cities such as Sydney. Several people were arrested during protests in Melbourne.

In the second largest city in Russia, St. Petersburg, forty homeless people were vaccinated against the coronavirus with the Russian vaccine Sputnik.

The  authorities carried out the action together with an aid organization.

60-year-old Vladimir Suvorov received a vaccination: “If you say it is necessary, so be it. I don’t usually go to the doctor, but it is difficult to argue with you. This is a different time and a now other life.”

And in Gaza, too, the first people have now been vaccinated, also with Sputnik and thanks to an initiative by the United Arab Emirates.

The  donation came into the country via the border crossing in the city of Rafah via Egypt. His blockade on Gaza keeps the country in place even during the pandemic.

Israel is the world leader in vaccinating its people. NGOs urged Israel to ensure that the Palestinians in Gaza and the West Bank are also vaccinated.

No nationwide vaccination campaign has yet started in Gaza.

The  vaccine donation comes from Mohammed Dahlan, a former top member of President Mahmoud Abbas’ Fatah party. Mohammed Dahlan now lives in exile in the United Arab Emirates and is a rival of Mahmud Abbas.

According to reports, some Palestinians see the staged vaccine delivery as a political move ahead of the parliamentary and presidential elections in May and July.

US Presidency: Trump gives in – with reservations

Every other day important: Ceconomy shares turn into the red: Ceconomy...

The three king jumping in Bischofshofen today in the live ticker

Attack on synagogue in Halle: assassin sentenced to the maximum penalty

The Pope prays for Diego Maradona