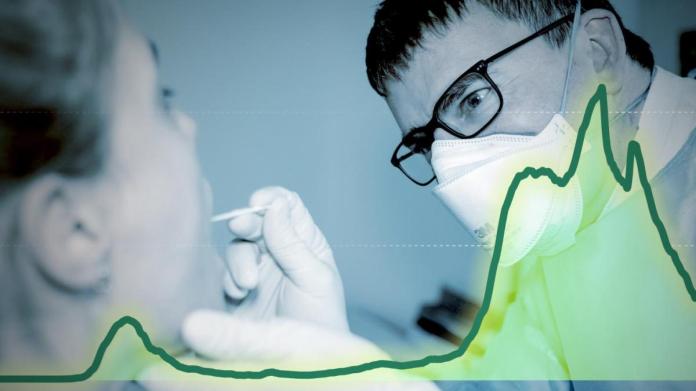 Dhe health department manager Nicoletta Wischnewski gets right to the point. “You know, an incidence of 35 can either be a big problem or completely harmless – that depends mainly on who is infected and how high the risk of an illness is,” the medical officer says on the phone.

Wischnewski heads the health department in the Berlin district of Charlottenburg-Wilmersdorf and is spokeswoman for the capital’s twelve medical officers. Together they have written a statement to the Berlin Senate, in which they demand a move away from the general orientation towards incidence values.

It is fundamentally not expedient to link containment measures “to incidences of 20, 35, 50 positive cases per 100,000 inhabitants”, says the paper, which WELT is available and which the “Tagesspiegel” first reported.

The  incidences do not reflect the actual infection process, as they are dependent, among other things, on test capacities and the public’s willingness to test.

The  health authorities have “long ago” prioritized their measures based on the possible consequences of those affected.

The  existing system is inadequate

It makes a difference whether it is asymptomatic individual cases or, for example, outbreaks in old people’s homes and hospitals with an increased risk of mortality. Head of Department Wischnewski illustrates the development with an example from her district: “Because of the vaccinations, we now have significantly fewer outbreaks in old people’s and nursing homes and have found ourselves in relatively calm waters.” 55 lies.

According to Wischnewski, the already existing Berlin traffic light system is insufficient as a guide. It is important to include the age structure, the symptoms and the number of tests – in each district or district individually. “We have to do the job of evaluating this locally.” Compared to the first wave, more symptomless people are currently included in the statistics, which have tested positive for Covid, but do not become seriously ill – and therefore do not burden the medical system. “If you look broadly, you will find a lot.”

But is the Berlin idea a possible path for the entire republic? Ute Teichert, chairwoman of the Federal Association of Doctors in the Public Health Service, is skeptical. “I can understand the wishes of my colleagues in Berlin from a technical point of view, but I don’t believe that they can be used across Germany,” said Teichert WELT.

At the beginning of the pandemic, she also criticized the 50s incidence as a target, but has now moved away from it. “A clear benchmark for coping with pandemics is very important for social interaction.”

“Unfortunately, the employees of the health authorities are not always part of the district administrators’ crisis team,” says Teichert

The  strategy demanded from Berlin also assumes that the health authorities in each district work very closely with the political decision-makers. In many places, however, this does not work as it does in the capital, according to Teichert. “Unfortunately, the employees of the health authorities are not always part of the district administrators’ crisis team and are technically involved.”

The ir conclusion: Only when the public health service participates more in political decisions can other categories besides incidence be considered. Two points would be decisive for Teichert:

The  second point could be the number of contacts to be tracked. An example: an incidence of 50 with two contact persons is sometimes less costly for the health authorities than an incidence of 30 with ten persons to be contacted.

Meanwhile, there is support for Berliners from major interest groups in the health care sector.

The  number of new infections per 100,000 inhabitants is an important criterion, “but it should not be the only one,” says Klaus Reinhardt, President of the German Medical Association WELT.

Also important are the number of infections broken down by age group and region, intensive care capacities, the number of fatal courses as well as the spread of new virus variants and their risk potential. So one can decide on the withdrawal of the first containment measures “much more differentiated” than is the case today.

The  German Hospital Society also speaks of a “narrowed view” when it comes to directly linking possible easing to incidence values ​​“of 35 and below”.

The  situation should be assessed more comprehensively: “Above all, this includes the question of the extent to which the infected people can expect severe disease courses,” says the designated managing director Gerald Gass.

And there is also further support for Berliners from the forefront of fighting pandemics. An exact analysis of the number of infections is crucial in order to assess whether and which loosening can be made, says the head of the department in Essen, Juliane Böttcher. In particular, she refers to the serious consequences of the lockdown for children and young people.

Frank Renken, Head of Office in Dortmund, also expressly welcomes the move. “We should not just think about adapting the strategy to combat the pandemic, we should actually initiate it.”

In order to be able to proceed accordingly, however, local data would have to be available, from which it can be seen whether one is dealing with an increasingly diffuse spread of the virus – or with a narrowable cluster. “It would certainly be good if the Robert Koch Institute adjusted its recommendations in this direction in order to promote uniform decisions nationwide.”

Other tones, however, come from the health department in the Offenbach district. Apart from outbreaks in individual hotspots, the number of unreported cases is correspondingly high if the incidence is high. That is why the incidence remains “an important indicator” for observing the increasing risk of infection – and is a basis for adopting protective measures, according to a spokeswoman.

The  Offenbach district’s corona crisis team looks daily at the number of occupied beds and the development of the number of deceased.

Many health authorities, however, do not want to comment on WELT’s request. This is primarily due to a lack of capacity. But Friedrich Pürner learned what consequences criticism of the corona control strategy of politics can sometimes have.

The  54-year-old epidemiologist and specialist in public health was appointed head of the health department in Aichach-Friedberg, a district near Augsburg, in February 2018.

But when he repeatedly criticized the anti-corona course of the Bavarian state government in autumn last year, he first had to report to the Ministry of Health – and then lost his post. Pürner was “seconded” to a Bavarian authority 70 kilometers away from his place of residence – so suddenly that not even a position was available when he was supposed to start at the State Office for Health and Food Safety (LGL) at the beginning of November.

The  doctor himself sees the secondment as a “punitive transfer” – and as a reaction to his repeated criticism. Among other things, Pürner had reminded the Berlin medical officers about the proportionality of measures and reprimanded the focus on the incidence values.

Covid-19 survived: “Working through the trauma”

Record year for delivery services – which food the Swiss prefer...

Corona and the sense of smell – smell nothing, taste nothing

Mutations – Spahn ignored warnings from virologists, according to a media...