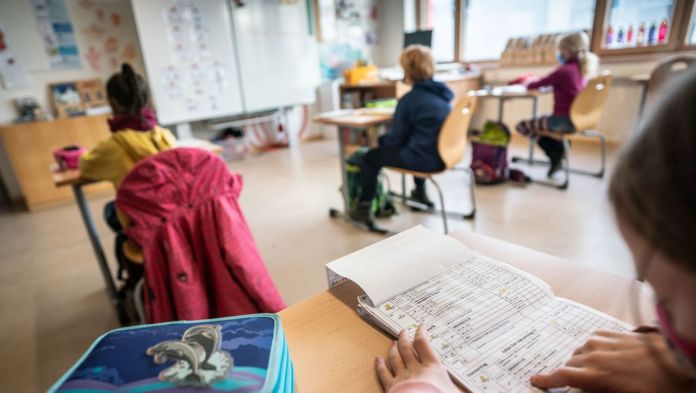 Is it justifiable to return to face-to-face teaching? Ten federal states brought at least some of their students back to class on Monday – mostly the children of primary school age and the members of the graduating classes. Saxony and Lower Saxony had already implemented initial concepts for opening up beforehand.
But what some invoke as a step back into normal school life is sharply criticized by others in view of the renewed increase in incidence. No question about it: Everyone involved is very nervous, and sometimes their nerves are on edge.

That was evident at the weekend in Flensburg, for example.  The re Fabian Halbe, head of the Fridtjof Nansen School, published a letter to the parents on the school website. In the letter, he also clearly criticized the opening policy of the state government in Kiel: “We consider the decision of the ministry to maintain classroom teaching regardless of the infection situation in Flensburg to be wrong.” Halbe received a lot of support for this on social media.

However, representatives from the Ministry of Education were not particularly impressed.

The  headmaster had “described a decree that was incorrect,” said David Ermes, spokesman for the ministry, to SPIEGEL on request. Possibly the headmaster was “not up to date”.

The reupon the school supervisory authority intervened and “explained to him his options for organizing the school.” A modified »clarification« can now be found on the school’s homepage.

The re critics accused the Ministry of Education of blocking social media users who attacked the Saxon school policy and, above all, had written against the opening course at primary schools.

The  ministry is vehemently against this representation. “Of course we don’t just block critics away,” said spokeswoman Susanne Meerheim to SPIEGEL.

The re is a lot of discussion in the ministry’s digital networks: “However, we have clearly and transparently stated in our netiquette that a minimum of respectful discussion culture must be observed.”

The  culture of discussion has meanwhile rather degenerated into a non-culture and has “meanwhile assumed an extent that is no longer tolerable”. It is therefore clear: “Anyone who violates the basic rules of discussion, which are actually taken for granted, can be blocked. We also have a duty to care for the (mental) health of our employees. ”

Bavaria’s Prime Minister Markus Söder meanwhile declared the return of primary school children to alternating lessons – despite the unclear infection situation from the mutated corona viruses – as the right path. “No, it’s not a mistake,” said the CSU chief on Monday before a meeting of the party executive in Munich.

The  students need a perspective: “We are experiencing collateral damage in students.”

The  next ten days will show how the openings affected the spread of the virus.

He was supported by Federal Minister of Education Anja Karliczek. “It is good that many schools in Germany are now gradually starting classroom teaching again,” said the CDU politician to the dpa news agency. Classroom teaching cannot be replaced by anything.

Government spokesman Steffen Seibert expressed himself more skeptically: “It is very important that you take a very careful look at whether and if and to what extent this will in turn lead to changes in the infection process.” Chancellor Merkel had spoken out in favor of the children returning to the facilities at a later date , originally agreed on March 1st.

Individual municipalities also view the plans from the education ministries with great concern.

The  mayor of Bad Ems decided to keep the primary schools and daycare centers closed in view of the local infection rates – despite different state regulations in Rhineland-Palatinate. “

The  virus is not interested in the whole discussion about different forms of face-to-face teaching,” Mayor Oliver Krügel said in an interview with SPIEGEL, “Anyone who understands how the virus works cannot open a single primary school with a clear conscience, and daycare centers at most in a real emergency. «

In the meantime, discussions are ongoing in Berlin about whether teachers and daycare staff should be vaccinated earlier than previously planned. Baden-Württemberg has already announced this regardless of the deliberations of the health ministers, and Schleswig-Holstein is also pushing for preferred vaccination for employees at schools and daycare centers. “If a society says that education has absolute priority, then we also have to give priority to the teachers and, incidentally, all other social workers, educators and daycare workers employed at school,” said Education Minister Karin Prien on Deutschlandfunk.

On Monday, it quickly became apparent how little planning security there is currently with regard to schools and daycare centers: After just one day, for example, most of the schoolchildren in Nuremberg learned that they would have to study from home again from Tuesday – the corona numbers are too high.

Nuremberg calls for a disaster after a fire in the power...